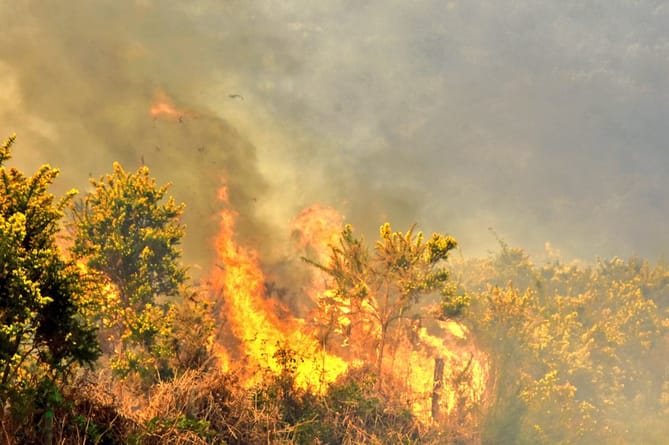 A SMOKE plume resulting from a large scrubland fire on the Ash Ranges reached as far as Farnham and Alton – and possibly even Bournemouth – on Saturday, as fire crews from across Surrey and Hampshire tackled the blaze.

Around 60 firefighters from stations including Farnham and Bordon, were called to the incident after more than 10km of vegetation caught light near Henley Park in Pirbright at around 11.30am.

Strong winds created difficult firefighting conditions, spreading the fast-moving blaze across a wide area and blowing the smoke plume directly over the Hogs Back and Farnham.

This resulted in firefighters advising homeowners to keep their doors and windows closed until the smoke had dispersed.

Firefighters also shared dramatic footage of the fire spreading after members of the public ignored warnings to stay away from the common – warning “flames can spread quicker than a child can run”.

Many people in Farnham took to social media to complain that they were unable to enjoy the sunny weather, or hang out their washing, in their gardens.

And such was the strength of the north-easterly breeze that residents of Southampton and Bournemouth were told the smell of smoke in the cities was likely caused by the Surrey wildfire.

A second fire broke out at Dolleys Hill Park in Pirbright Road later on Saturday, and the fire illuminated the night sky from the Hogs Back into Saturday evening.

It is believed to be the first major wildfire of 2022 on Surrey and Hampshire’s commons, following a series of smaller fires at Caesar’s Camp north of Farnham earlier this year.

The Met Office currently warns there is a ‘very high’ risk of wildfires over the coming five days across Surrey and Hampshire.