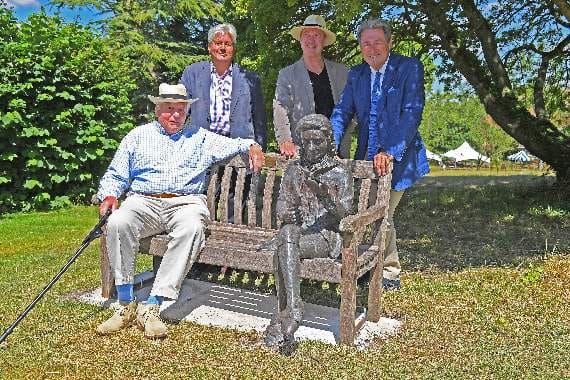 ALAN Titchmarsh unveiled a statue of the 18th-century natural history pioneer Gilbert White in the stunning grounds of ‘The Wakes’, Gilbert’s family home in Selborne, this week to mark the great naturalist’s 300th anniversary.

Unveiling the sculpture, crafted by renowned sculptor Peter Lyell Robinson, Mr Titchmarsh said: “You may wonder what on earth an 18th-century clergyman can contribute to the way we live today, with technology and so many things that are so far divorced from swallows perched on hands. But we only got here because of the likes of Gilbert White, asking questions, and studying the natural world.

“Gilbert gave us the tools to understand how the natural world works, and that’s vital today.”

Gilbert White was born on July 18, 1720 and in 1789 published his book The Natural History of Selborne, a classic of natural history thought to be the fourth most published book in the English language.

He also inspired many of the great natural scientists of the modern world, including Charles Darwin and David Attenborough.

The museum was ready to host a year of events to celebrate the tercentenary of Gilbert White’s birth, but because of Covid-19, most had to be cancelled.

“It is wonderful to finally be able to mark the occasion,” said Judith Bowles, co-director of the museum,

“So many events have been cancelled, but it is great to be able to mark this important date properly.”

The statue was designed and created by sculptor by Peter Lyell Robinson, and depicts Gilbert White sitting on a bench, notebook in one hand, with the other just releasing a swallow.

It was paid for by The Friends of Gilbert White & The Oates Collections, and other patrons to the museum.

It is dedicated to Dr Rosemary Irwin, who served as chair of trustees for ten years and was instrumental in the commissioning of the statue. Sadly, Dr Irwin died in June.

Professor Khalid Aziz, the current chair of trustees, said: “We had no idea she would not be here today, but I am sure she is with us in spirit.”