Burger back on menu at The Shed 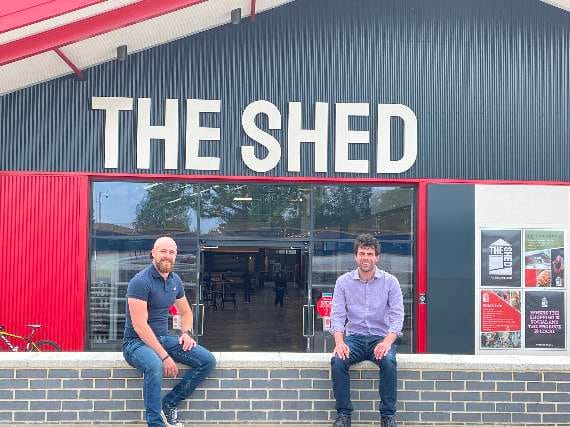 A FORMER McDonald’s site director has teamed up with a local councillor to launch a new burger business at The Shed.

350Burger will take over from Boigers, which left the new town hub after just a week.

Dayne Cartwright and his partner Tracey Terry – well-known locally as the duo behind Acorns Coffee and Cake – have teamed up with county councillor and Whitehill Town Council leader Andy Tree to make their dream a reality.

On his new venture into the burger world, Dayne (pictured right with Cllr Tree) said: “I basically bleed ketchup and caffeine.”

His career has included working as part of a McDonald’s franchise group and a café in Heathrow’s departure lounge, while Tracey worked as an operations manager with Costa Coffee.

He said: “We’re both used to coffee, burgers, high volume and everything in between.

“It would be foolish to say we’re not nervous, but that’s only because we want to bring the town something they’re proud of as much as we are.

“The butterflies in the belly are purely excitement as we build the brand and our processes in the next couple of weeks and then serve our first customers when we open.

“As with Acorns, we simply want to deliver a great product.

“We want to deliver an awesome burger without the fuss, never being too complex – our plan is to use a local butcher the town will recognise and allow our customers to build their burgers their way. Great quality, nice and simple.”

Cllr Andy Tree – who invested in the pair after they were a client of his accountancy firm – said his role was “reasonably silent”, having provided investment and “background knowledge” in admin and accounting.

He said: “It’s me and him – we’re business partners in the venture.”

And on being at The Shed a lot more, Cllr Tree said: “Dayne visited the butcher on Tuesday and I’m going to be his guinea pig – so I’ll certainly be a lot fatter too!”