Climate protesters in scuffle with police ahead of Surrey council meeting 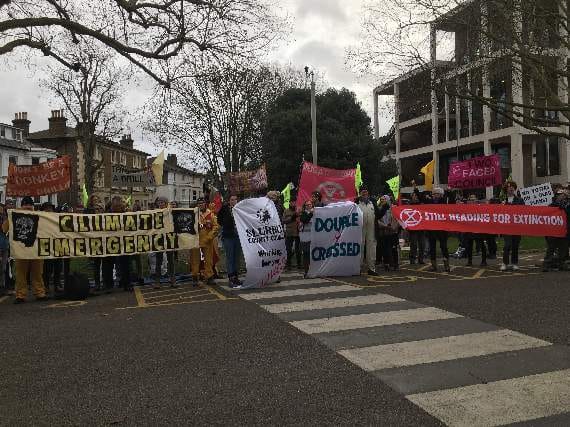 POLICE moved in on a protest outside Surrey County Hall to remove a lighthouse structure ahead of a council meeting.

One protester was injured as around a dozen officers lifted up the tall, metal statue and marched it off to the back of the council offices in Kingston ahead of the full council meeting on Tuesday, December 10.

It was kept open for press and council officers.

The lighthouse, known as Little Greta, has been used by Extinction Rebellion (XR) South East at other protests and events including the Labour Party Conference in Brighton.

Members of XR South East said this was the first time it had been removed by police.

The protest started at 9am as environmental campaigners gathered outside the county hall ahead of the meeting at 10am.

Three barrels and the lighthouse were then removed as protesters started banging drums and singing.

They were all props for a theatrical demonstration the campaigners were hoping to hold outside the Surrey County Council offices in Penrhyn Road.

Chris Neill, a campaigner from Godalming, said: “We were going to erect it here and it was going to sound an emergency shipping horn.

“I feel upset about it [being removed]. I was surprised that the police conduct was quite violent. People were thrown aside.”

Carol Foussat, a member of Extinction Rebellion from Godalming, injured her finger in the commotion between officers and protesters and was still shaking moments after the police stepped in to remove the structure.

She said she was trying to ask the police under what powers they were taking the lighthouse.

She said: “I couldn’t believe it. I haven’t seen anything like it in my life. I’m really angry. These are our police. They are meant to be looking after us. Under what powers are they removing this?”

A member of XR South East said the lighthouse has been used elsewhere “with no problems” before. She said they were not going to cover it due to the winds.

The council meeting still went ahead at 10am but with no members of the public allowed in.

Council chairman cllr Samuels opened the meeting saying it was his decision to ban public from the meeting “on the advice of the police”.

The demonstration was about SCC’s decision to grant planning permission for 20 years of oil production at Horse Hill near Horley and the investment of pension funds in fossil fuel companies.

Council leader Tim Oliver also spoke about the protest when asked for a reaction to what the demonstration was about.

He said in the meeting: “It’s a shame there was an incident this morning which made it unsafe to allow people into the public gallery.”

On pension investments he said that was an issue for the pension committee adding: “It’s not something we as members have any control of.”

And on the Horse Hill planning application he said: “The planning committee, as I understand it, complied with legislation. There were no planning guidelines to oppose the application.”

He said the council was held to government rules and protesters should “lobby the government to change rules”.

The planning decision is subject to a potential Judicial Review being sought by campaigners.

The protest was part of a coordinated action day against the links between fossil fuels and the climate emergency under the seasonal banner ‘10 Lords-A-Leaping Through the Hoops of the Fossil Fuel Industry’.

Two protesters locked themselves to each other outside the gates to the site.

The lighthouse was returned to campaigners just after the meeting finished at noon.

A Metropolitan Police spokesman said: “Police attended Surrey County Council Headquarters in Kingston on the morning of Tuesday due to a protest taking place.

“No arrests have been made.”