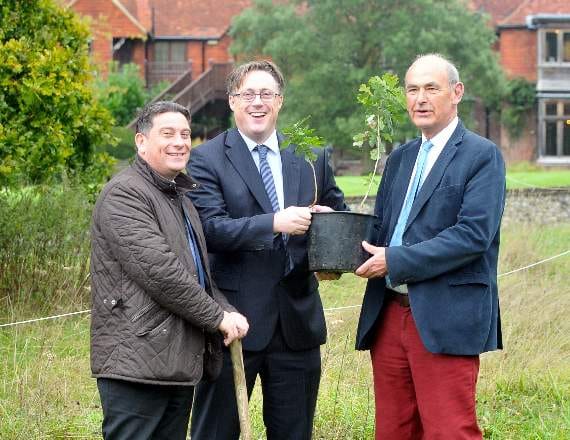 East Hampshire District Council has launched a programme to plant a tree for every resident in the district at the home of famous ecologist Gilbert White.

The council plans to plant 120,000 trees across the district as part of its commitment to battle climate change and reduce its own impact on the environment.

The first tree was planted in the grounds of Gilbert White’s House and Museum, in Selborne, which will be celebrating the naturalist’s 300th birthday next year.

Gilbert White is considered to be the father of ecology for his detailed investigation of the relationship between plants, animals and humans.

He was author of the renowned book, The Natural History of Selborne.

The tree, planted by district council leader Richard Millard, is in the shadow of a great oak planted by Gilbert White himself when he was a ten year old boy in 1730.

It is hoped that communities, schools and businesses will take up the challenge to find places to plant the new trees and play their part.

As the trees mature they will, according to the district council, “play a significant role in reducing carbon in the atmosphere as well as boosting biodiversity”.

Councillor Millard said: “We think Gilbert would have approved of our tree planting programme – and we are dedicating the project to him as a very distinguished former East Hampshire resident, a great naturalist and the founder of ecology.

“This project will not only help our ambitions to go carbon neutral, it will also inspire our local communities and fire the imaginations of the young people who will live in the world we leave behind.”