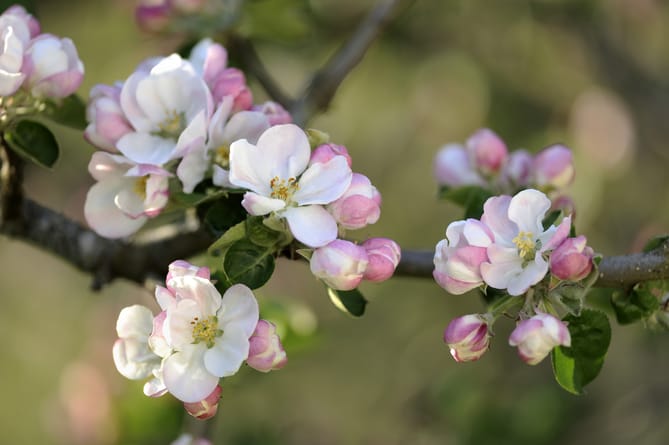 SINCE the early 2000s, the orchard at The National Trust’s Swan Barn Farm in Haslemere has blossomed – literally – from just six trees to 100.

And now, inspired by its success in Haslemere, the town of its foundation, The National Trust has embarked on an ambitious new project to ‘bring blossom back’ and reverse the decline of Surrey’s orchards.

New research by the National Trust has found there are 85 per cent fewer traditional orchards in Surrey since the 1900s – a number reflected UK wide.

This has, it says, resulted in huge losses in habitats for nature, and means fewer people can enjoy one of nature’s great spectacles – spring blossom.

To combat this, the trust has set out to plant four million blossom trees and new traditional orchards on its land – including the planting of a new 250-tree orchard at Westhumble, near Box Hill, this year.

The study was published to coincide with the launch of The National Trust’s second annual #BlossomWatch campaign, to encourage people to enjoy and celebrate spring blossom similar to Japan’s ‘hanami’.

It is the first comprehensive review of both traditional and modern orchards in England and Wales, aimed at improving understanding of the historic loss of blossom across landscapes, and the impact on nature and wildlife.

Nationally, it found ‘total blossom’ – the area taken up by both traditional and modern orchards in England – has more than halved (56 per cent) since around 1900, with 41,777Ha left growing today.

And in Surrey, the trust found the county today has a total orchard cover of just 204 hectares (Ha), down from 1,061Ha in 1914. This includes 54Ha of intensively managed modern orchards.

Counting the areas of modern and traditional orchards together, the decline in ‘total orchard cover’ in Surrey sits at 80 per cent.

Data scientists have also been able to determine that the loss of traditional orchards recorded in Surrey since 1914 appears to have been driven by:

For more information or to make a donation towards the charity’s tree planting ambitions visit www.nationaltrust.org.uk/blossom-watch

Why is Swan Barn Farm so special?

An impressive range of heritage and local fruit trees can be found in the two orchards at Swan Barn Farm, in Haslemere.

In the early 2000s only six trees remained from the dwindling old orchards.

The South Downs West countryside team set about planting more than 100 apple trees to bring it back to life. They restored a historic apple press which had been working in orchards around Haslemere for more than 100 years.

Today more than 50 varieties of apple trees grow in the orchard, among a sprinkling of pear, plum, damson and cherry trees.

National Trust lead ranger David Elliott said: ‘We are enormously proud of our two orchards here at the farm – they are a haven for wildlife, and have growing in them a number of wonderful and rare varieties of apples and pears.

“Orchards are a living cultural link with the past, a very important and now, sadly, increasingly-rare and threatened part of our countryside.”

The trust, with the help of COPSE volunteers, plant new trees every year, tend to the ones they already have, and invite people to go along and take part in the traditional rituals and harvests they have to offer.