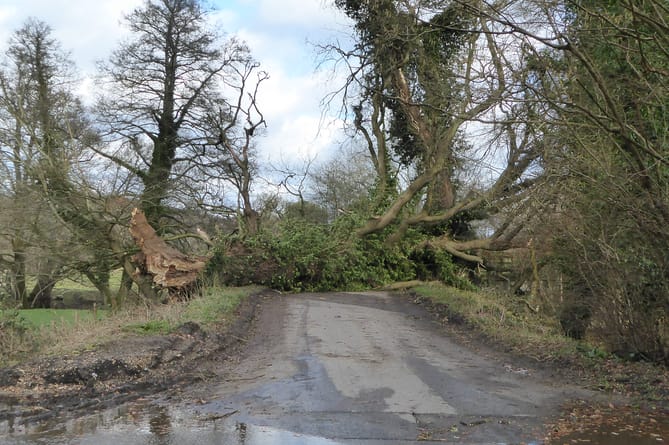 SURREY and Hampshire is surveying the damage left behind by Storm Eunice after 80mph winds swept through the area on Friday.

The Met Office issued a ‘red’ alert for wind – its highest alert level – to cover London and the South East from 10am to 3pm in the early hours of February 18.

And the storm duly arrived at around 11am, bringing with it 80mph gusts inland – and what is thought to be an English record 122mph gust at the Needles off the west coast of the Isle of Wight.

The area’s schools were the first to announce closures in anticipation of the storm, but many local businesses quickly followed suit.

Collapsed trees were reported across the area, in some cases damaging vehicles, and fence panels were torn from their posts and trampolines sent flying across local roads.

South Western Railway was forced to suspend rail services until “at least 6pm” on Friday because of around 30 fallen trees on its network, and local bus services were also affected.

Power cuts were widespread in Alton, Farnham and Haslemere, with Waverley Borough Council evacuating three of its leisure centres in Farnham, and both Haslemere centres, because of power outages.

See our live blog below for how Storm Eunice unfolded across the Surrey and Hampshire border.