Remove potential flying objects from your garden ahead of Storm Eunice, residents urged 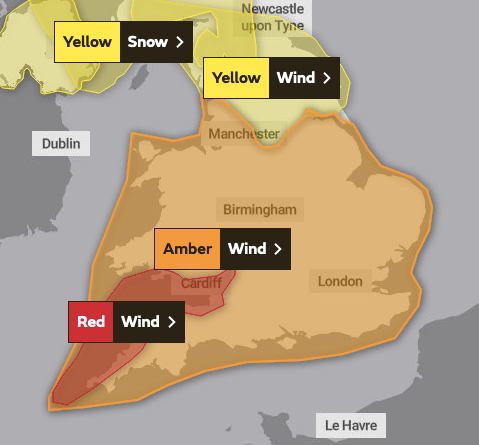 REMOVE anything from your garden that could become a flying object – that’s the message to Surrey and Hampshire residents ahead of the expected arrival of Storm Eunice on Friday.

The Met Office has upgraded its warning to a ‘red’ alert, warning of a threat to life by flying debris in parts of the South West and Wales, in the early hours of Friday – and an ‘amber’ alert warning of ‘extremely strong winds’ remains in place for Surrey and Hampshire.

While there is still some uncertainty in the track of Eunice, the Waverley Weather Watchers Facebook group predicts “a period of 78mph winds” can be expected locally, and has advised home-owners to take precautions.

A post on the group’s page on Thursday morning read: “I would take today as an opportunity to remove anything from the garden that could become flying object. Chairs, tables, footballs, kids toys etc. And make sure trampolines are secured to the ground in some way.

Heath Watch: What to look out for on our local heathland this January

“Make sure you know where torches are, as if the power goes, it may be off for a while.”

A spokesman for the Met Office added: “Extremely strong winds are expected to develop over southwest England early on Friday, before spreading north and east during the day.

“Around coasts of west Wales and southwest England, gusts of 80 to 90 mph are possible. Winds are expected to ease across western areas through the afternoon, and eastern areas during the evening.”

What to expect in the ‘amber’ alert area including Surrey and Hampshire, according to the Met Office:

For the latest updates visit: https://www.metoffice.gov.uk/