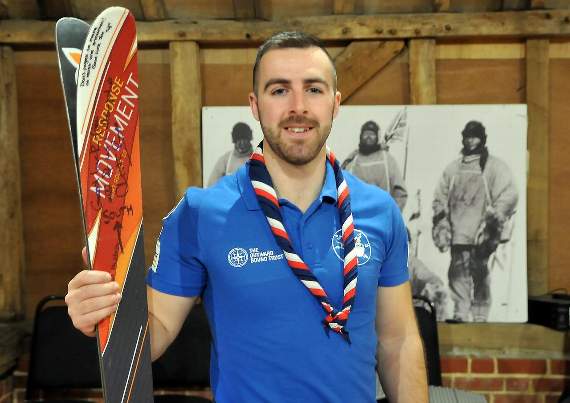 SKI-SY DOES IT: Joe Doherty is heading for Antarctica for his own expedition to the South Pole

THE OATES Collection at Gilbert White’s House Museum in Selborne celebrates the first British team to reach the South Pole in 1912 – and now it can count itself as the place Hampshire Scout Joe Doherty launched his own Antarctic expedition 106 years later.

Joe is part of the Hampshire Scouts expedition team who have been planning their trip for many years.

The team have reached all continents apart from Antarctica so reaching the South Pole was the obvious aim, but Joe and the team wanted to do something no-one had done before so he will be skiing to the pole then using wind power to return.

Man-hauling food and kit, he will set off from the Messner, starting on the edge of the Antarctic Plateau. His journey will cover 566 miles to the Geographic South Pole, returning by kite ski to Hercules Inlet at the southern tip of the Ronne Ice Shelf.

Joe is originally from Andover and joined his local Scout unit aged 12, where he soon developed a passion for pushing himself outside his comfort zone. Joining Hampshire Scout Expeditions in 2009 through the Peru expedition, Joe co-led the Nepal 2013 expedition with other members of the team.

Launching his latest trip from the Selborne venue earlier this month, Joe went straight to the airport to begin his journey to Antarctica where he will be for about two months before returning in the new year.

When he returns from his adventure he will give talks to members of the Scouting association of all ages at the Field Studies Centre.

On Saturday Joe was joined by fellow teammates who are now no longer able to accompany him, family, friends and several members of the Scouting community.

He explained to the audience the route he would be taking, his training, his kit and the practicalities of an Antarctic expedition.

The museum has an exhibition dedicated to Lawrence Oates, who was part of the Terra Nova expedition in 1912, making this latest Antarctic expedition launch a very appropriate occasion.

A museum spokesman said: “We wish Joe all the best and look forward to his return in the new year.”