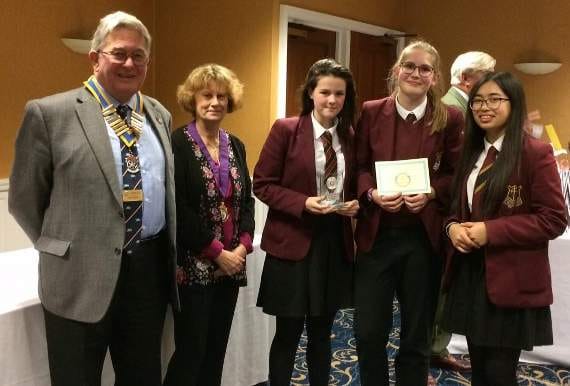 CONTESTANTS in the district semi-finals of the Rotary Youth Speaks competition held at The Georgian Hotel in Haslemere were commended for the “atonishing high standard”.

Haslemere Rotary organised the regional challenge of the popular annual national competition in which intermediate and senior students go head to head in teams of three to persuade and entertain audiences with their display of wit and knowledge of a topic.

The teams present arguments and points of discussion, before taking questions from the judging panel who are, themselves, skilled orators.

Participants can select a topic which is important to them, giving them an opportunity to delve deep into research, formulate ideas and build confidence.

The intermediate winners were from Hawley Hurst School in Aldershot, and the senior winners were students at St Philip Howard School, Chichester.

Mr Robini said: “Congratulations to the winners and local teams also did extremely well. The standard of the teams at the competition this year was astonishing.

“The judges had a really tough task. Some really controversial and diverse subjects were well discussed by students from all the schools taking part. It was fabulous to see such confidence and capabilities from these young contestants.”

The nationals finals will be on May 12 at The Rotary Showcase in Nottingham.