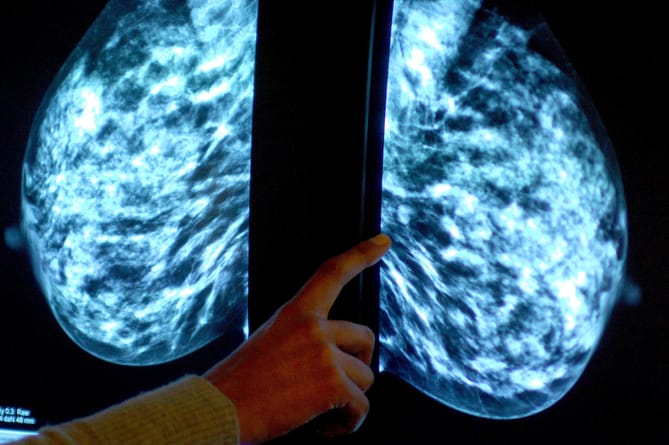 Tens of thousands of Surrey women were not up to date with potentially life-saving cancer checks last year, figures show.

An "alarming" drop in breast cancer screenings across England is a reminder of the devastating impact Covid-19 has had on cancer care and diagnosis, charities say.

NHS England figures show a 44% fall in the number of women who were screened for the disease nationally in 2020-21, while the number who had cancers detected via screening fell by more than a third in the same period.

The screening programme sees women aged between 50 and 71 invited every three years to undergo a mammogram (X-ray) designed to detect cancers that are too small to see or feel.

The data shows that 66% of eligible women in Surrey were up to date with their screenings at the end of March last year, meaning roughly 46,131 were not.

That proportion was down from 75% the year before.

It meant health services in the area missed the national minimum target of 70% coverage.

Nationally, 64% of eligible women attended their last check, down from 74% in 2019-20 and the lowest coverage rate on record.

Baroness Delyth Morgan, chief executive of the charity Breast Cancer Now, warned that hundreds could die over the next decade due to the impact of the pandemic on screenings.

She said the human cost behind the latest figures is "stark", adding: “Screening uptake has hit its lowest point in history despite NHS staff working tirelessly, in the toughest of circumstances, to restart and continue breast screening services.

"Breast screening is a vital tool for detecting breast cancer early, and the sooner it’s diagnosed the more likely treatment is to be successful."

Screenings were seriously impacted by pandemic-related disruption and were paused between March and June 2020 to protect patients and staff from the virus, before resuming that summer.

Self-isolation and shielding are also believed to have had an impact on attendances throughout the pandemic.

Jodie Moffat, head of early diagnosis at Cancer Research UK, said a lack of NHS capacity could impact its ability to deal with the backlog of women awaiting invitations, and called for the funding of extra staff.

She added: “Covid-19 has had a devastating impact on the diagnosis and treatment of cancer.

"During the first year of the pandemic we saw a drop off in the number of women starting treatment for breast cancer in England, which we thought was partly linked to delays in breast cancer screening."

Professor Stephen Powis, NHS medical director, said: “The pandemic inevitably had an impact on some routine services and we know that fewer people came forward for cancer checks.

“The NHS is now inviting more people than ever to be screened, while investing a further £70 million to support screening services, which we know saves thousands of lives, so it remains vital that women come forward when they receive their invitation to do so.”