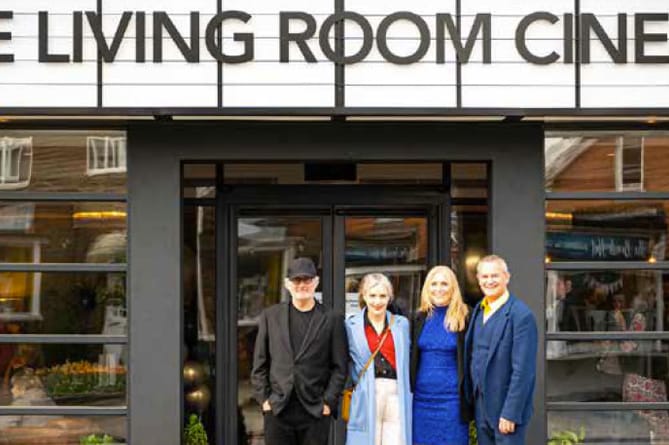 THE CURTAIN was lifted at Liphook’s brand-new Living Room Cinema at a star-studded opening night screening of Downton Abbey: A New Era – attended by Lord Grantham himself, Hugh Bonneville.

All proceeds from ticket sales of the April 30 charity gala screening were donated to the Disaster Emergency Committee’s Ukraine Humanitarian Appeal.

Several local businesses donated their time and products to the gala screening, including The General Wine Company, a Liphook-based wine supplier, Olive & Bloom, a grazing table company based in Haslemere and Milland-based photographer Mark Keohane.

The glittering event is the first of many planned by The Living Room Cinema, with numerous Q&As and presentations from filmmakers in the pipeline, utilising the extensive network of filmmaker connections of the cinema’s board of directors.

Opening in the former Anchor Garage showroom off Liphook Square and independent of major cinema chains, The Living Room Cinema promises hand-picked films ranging from the latest blockbusters to the classics, in homely surroundings with an all-day cafe that transforms into a cocktail and wine bar in the evening.

Book tickets (£8 for an armchair for one, £17 for a sofa for two) online at https://www.thelivingroomcinema.co.uk