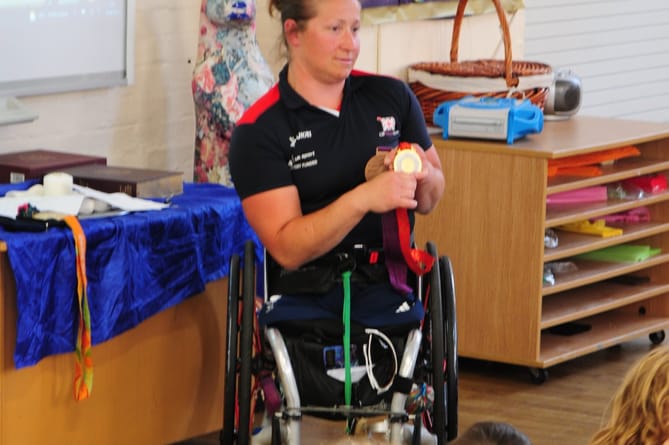 Rachel Morris, Farnham’s three-times Paralympic medallist, is facing one of her toughest challenges yet – persuading her fellow Alice Holt parkrunner and St Andrew’s Infant School office manager Carolyn Wickham that taking on the 50-mile route in this month’s Farnham Charity Bike Ride is a good idea!

The bike ride, after hugely scaled-down events in 2020 and 2021, will return in all its glory on Sunday, July 3 – with more than 1,000 cyclists of all ages and abilities again expected to saddle up for its popular 16, 25, 50 and 75 mile routes, the latter including a gruelling climb up Butser Hill.

Registration is open now online at https://www.farnhambikeride.org.uk – with all proceeds being split between St Andrew’s Infant School, which launched the first-ever Charity Bike Ride in 2008, and organisers Farnham Round Table.

ME Estate Agents is sponsoring the medals, Tootsies Day Nursery is supplying flapjacks and brownies, The Bicycle Cave will be on Castle Street for last-minute repairs and EF Sport Therapies for post-ride massages!

Rachel, who won gold and bronze handcycling medals at the Beijing and London Paralympics before winning a further gold in rowing at the Rio Games, was on hand to launch this year’s ride at St Andrew’s last week before answering pupils’ questions in an assembly (pictured).

She will be taking part in this year’s ride, alongside St Andrew’s office manager Carolyn Wickham, who she hopes to persuade to tackle the 50-mile route!

Jayne Venables, executive head at Potters Gate and St Andrew’s schools, said: “St Andrew’s was one of the founding members of the original team that set up the Farnham Bike Ride when the school was celebrating its 150th anniversary. The bike ride is an enormous help to St Andrew’s in terms of fundraising.”