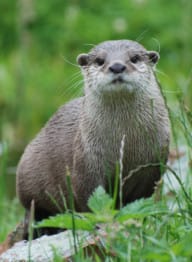 WILDLIFE enthusiasts received some bittersweet news this week with the discovery of a dead otter near King’s Pond.

While saddened to see the animal killed on Ashdell Road, many were excited by the prospect of the elusive species living in the town.

Landscape photographer Ginny Boxall was happy at least one of the creatures had chosen to make its home near the pond. She said it was "testament to what a truly amazing natural habitat we have here in Alton".

"Sadly we now have to do much, much more to secure traffic calming measures along this stretch of the road," she added.

Vic’s Music Matters: All the best live music locally from June 30 to July 6

The Shed in Bordon celebrates first birthday with big party

"Locals please take great care along by the pond - its not only ducks that you are killing but now maybe our only otter.

"We so hope there are more but we must avoid another tragedy like this happening again."

A Hampshire and Isle of Wight Wildlife Trust spokesman told the Herald the dead animal looks like a European otter.

The trust was this week in contact with residents to arrange for the body to be collected and sent to the Environment Agency, which pass otters killed on the road to researchers studying the species.

"Otters have staged a bit of a comeback, after nearly going extinct in the 1950s and 1960s," the spokesman added.

"However thanks to efforts to improve water quality and the banning of chemicals such as DDT, there are now increasingly good chances of spotting this enigmatic predator.

"While we’re not aware of any previous formal records of otters at King’s Pond, otters are now present or visiting all of Hampshire’s rivers where there is suitable habitat, so there is a chance that the pond and nearby waterways will receive a visit from the occasional otter."

But others highlighted that nature is often more complex and less idyllic than people might like to believe.

"Whilst I love all wildlife we may have had a lucky escape here as the otter eats its weight in meat daily," Avril Pink commented.

"This may have resulted in many of the other species around the pond diminishing, they have also been known to poach from domestic ponds."

Altonian Suzie Burns has coincidently been surveying residents about the "increasingly worrying issue of speeding traffic along Ashdell Road, adjacent to King’s Pond". As a parent to young children she is "very concerned about the lack of crossing provisions".