Peeps into the Past: A potted history of Grayshott Pottery from 1901 to the present day 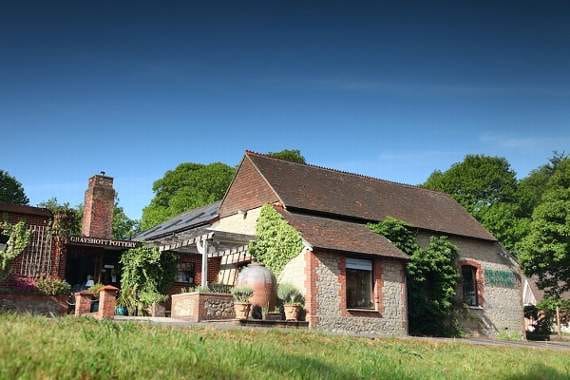 PHIL Bates from Grayshott has been in touch with a request for readers’ help. As many will know, Phil has been associated with Grayshott Pottery for many years, having started there in 1960 as a ceramic modeller but eventually becoming managing director and chairman.

Although now retired, he is still a trustee of the employee benefit trust. Here, Phil relates the history of the pottery and hopes readers may be able to fill in a considerable gap in the pottery’s history archive...

GRAYSHOTT Pottery is still today a working commercial pottery but it can trace its origins back to Compton Pottery, which was situated next to the Watts Art Gallery at Compton village near Guildford.

Farnham author's debut novel is about twins separated at birth

In 1900, with the Watts chapel project completed and seeing the potential for her home arts class to become a village industry, Mary Watts founded the Compton Potters Arts Guild. The guild followed the model of a medieval guild with workmen being given the opportunity to ennoble their lives through their own creative handiwork.

A commercial pottery needed premises, and in 1901 – financed by the Watts – the Compton Pottery was built at the bottom of the hill beneath Limnerslease.

Rapid expansion followed in response to demand, and when plans for Watts Gallery were drawn up in 1903, accommodation for 12 apprentice potters was included in the design. The original gallery building was even known as ‘The Hostel’.

The Compton Pottery prospered throughout the beginning of the 20th century. Liberty & Co in Regent Street stocked its works and, contrary to its own policy, allowed Compton ware to be marked with its own stamp.

The pottery became well known for its large ornamental pots, birdbaths, garden ornaments and sundials. Architectural commissions were received from Edwin Lutyens and Clough Williams-Ellis for his Italianate village at Portmeirion, among others. Gertrude Jekyll commissioned a garden pot that was subsequently marketed as the ‘Jekyll model’.

The Compton Pottery remained a successful industry, providing employment in the village until 1956. Watts Gallery now houses a unique collection of more than 200 pieces of Compton pottery, a testimony to the Arts & Crafts legacy in Compton pioneered by Mary Watts.

In the late 1940s the pottery was faced with closure. David and Barbara Dunhill, who knew little about pottery making but had artistic leanings, decided to take on Compton Pottery and continue the making of pottery – although very different to what was previously made at Compton.

David, from a branch of the tobacco family, was the son of Thomas Dunhill, an English composer and writer, and Barbara was a talented painter and designer.

They tried to make a fresh start with the manufacture of useful household wares. But they were unable to devote as much time to this as was needed.

David worked for the BBC in London as a presenter and Barbara had four young children to look after. So they tried to obtain outside expertise. An advertisement in the personal columns of The Times brought a response from Ian Tippetts. At the time he was learning about pottery manufacturing in Stoke-on- Trent at Doulton & Company.

All went well, and it was agreed he should take on the day-to-day management of the pottery. But the running of Compton Pottery was proving difficult and had not improved– and the final blow came in 1955 when the trustees of the adjacent Watts Gallery refused to renew the lease of the pottery building.

There was no alternative but to wind up the business considering its already-precarious state.

Meanwhile, in the hamlet of Sandhills near Brook some four miles north of Haslemere, an organisation called Kingwood Rural Industries had been established by Sir David Wilkinson.

His father Sir George Wilkinson, a member of the Wilkinson Sword family and a former Lord Mayor of London, had a country house in Brook which is adjacent to Sandhills – a property he had given to his son as a wedding present.

Sir David had served in the Royal Navy during the war and had been injured at sea. After the war he set up Kingwood Rural Industries to give employment to ex-servicemen – and among the activities were making pottery, furniture making and market gardening.

But through lack of experience – and probably investment – this was another venture on the point of collapse.

When Sir David heard of the fate of Compton, he contacted Ian Tippetts to see whether he would be interested in taking over the pottery at Sandhills, which by then was the only viable part left of the Kingwood set up. But Kingwood Pottery, as it was then called, was different from Compton. It had been set up with some professional advice in what had been the stable block of the nearby Kingwood House, and it had the basic features of a working pottery.

In the final year of Compton, the team had been strengthened by the arrival of David Real. He had recently been working at Poole Pottery as a thrower and had acquired considerable skill in this field. Also he had a good understanding of the working of a successful commercial pottery producing the type of articles it was hoped to make at Compton.

In 1956 Ian Tippetts decided to try to make a fresh start with Kingwood Pottery and enlisted David Real to join him in this new venture. Kingwood contributed Roy Saywell, who had left Compton earlier, to be David Wilkinson’s manager.

The first task on the agenda was the immediate abandonment of the Kingwood name, which by then had a poor reputation for quality.

The next important task was the installation of an electric kiln to replace the existing oil-fired one which was totally impractical.

It was so large it needed around eight weeks’ production to fill, making sensible delivery times an impossibility to achieve.

The policy at Sandhills was to make decorative articles for the home, some hand thrown, some cast in moulds such as bowls, jugs and vases. These sold well, disposing of everything produced.

Business continued to prosper and turnover increased so it became urgent to look ahead to the future of the pottery and staff.

In 1966 an advertisement appeared in the Herald for the sale of light industrial buildings in Grayshott currently being used by the Grayshott and Hindhead Laundry. Surrey Ceramics bought the site in 1967 and is still there today and universally now known as Grayshott Pottery.

The older part of the building and the school next door were erected at much the same time, around 1870 to 1880. The school was to meet the educational needs of the village children, while the old building, now occupied by the Pottery Emporium, was built as a laundry to provide employment for the girls when they left school.

Grayshott Pottery has always been associated with art. From producing ceramic giftware for London stores and gift shops, it now creates exclusive studio art ceramics for galleries and homes around the UK. Under the Surrey Ceramics brand, it also makes bespoke ceramics for celebrity chefs and catering ware for many national high street pubs and restaurants.

It prides itself on being run as an Employee Benefit Trust, which gives all the staff a direct, personal share in the business and its success.

An innovative and exciting development was the acquisition of Dartington Pottery in 2005, when it ceased trading in Devon. This enabled it to transfer a set of new skills using high-fired reduction glazes to achieve stunning vibrant hand-painted finishes.

On a visit to Grayshott Pottery, it’s possible – if pre-booked – to look around the manufacturing processes and to watch the artists at work in the studio creating their own designs.

The extensive Emporium features its own pottery pieces entwined with other quirky and designer brands. From statement jewellery and collectables to striking home décor treats, the Emporium is a tranquil escape to browse for that special touch for the home or a gift.

From everyday crockery for the kitchen to one-off Dartington Pottery masterpieces, perfect for engagements, weddings, anniversaries, birthdays and Christmas, it offers gifts straight from an artist’s hand.

The licensed Kiln Café not only serves up a mouth-watering, locally-sourced menu on the pottery’s own tableware but, as it overlooks the artists’ studio, you can also watch them work while you enjoy a tasty treat.

Sadly, all the historic archive materials covering the Kingswood pottery and the period from 1967 to 1982 at Grayshott were lost in a fire.

So please have a look through your own family photograph collections and see if you have any images which can help Phil rebuild that important archive.

If you can, please drop Mr Bates an email to [email protected] or let me know and between us we’ll arrange to copy the images and restore some of the missing history.

Hopefully, too, I’ll be able to feature them here and show a little more about this wonderful village craft industry.