Peeps into the Past: Segregation at Frensham as epidemic tears through the area 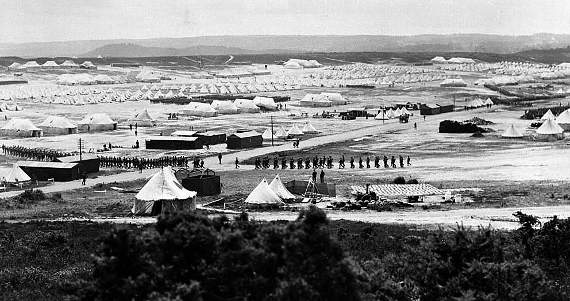 AT THE MOMENT there is much talk of the “unprecedented” events we are seeing unfold around us and it makes one wonder what life must have been like locally during 1918 and ’19 when the Spanish Flu pandemic was at its peak.

Farnham had its own isolation hospital off Weydon Lane (it later became widely known as Green Lane Hospital) and I believe many patients were cared for at Wimble Hill Hospital off Crondall Lane above Dippenhall.

However, at the time the First World War was still raging and some of the highest casualty numbers were experienced by the combatant forces. Locally, the Canadians based at Bramshott were particularly badly hit.

Thanks to some research by Pete Andrews, a volunteer at the Rural Life Living Museum at Tilford, we have access to some details of what was going on there.

In a report from the Bramshott headquarters of the Canadian Training Division for June 1918, under ‘Health’, it states “the general health of the troops is good, in spite of a slight epidemic of Spanish Flu.”

But by October the tone had changed somewhat: “The epidemic of influenza which raged during the month seriously interfered with training. The number of admissions to hospital amounted to 2,242, as well as many held within the units’ lines. The deaths numbered 142.

“The camp was quarantined from 5th to 28th October 1918. A Reinforcement Segregation Camp was established on the 19th instant for the purpose of segregating: (a) Drafts proceeding overseas, (b) Candidates proceeding on courses.”

That last sentence actually covers a vast new camp set up locally as is shown in these photographs that Pete has also managed to unearth.

For many years before the First World War, Frensham Common had been the site of summer training camps for the army but when the war started, training continued there throughout the year and details of that camp has featured here many times in the past.

The flu first hit in April 1918 and spread through the Canadian Corps with symptoms lasting until July. However, the men affected by this wave usually returned to duty within a week with no lasting effects.

When the second wave of Spanish Flu arrived in England that September, the troop ships bringing soldiers from the New World created ideal breeding conditions for the virus (much as cruise liners seem to have done in the current pandemic).

Camps were therefore set up in which the arriving soldiers were held for 28 days to continue their training under quarantine conditions. Frensham Common was chosen as the site for one of the largest of these.

The photographs taken from King’s Ridge, one with the Great Pond in the background, show the huge extent of the camp with squads of men being drilled.

Other images show a line of men, I suspect on medical parade but with no ‘two metre’ separation in evidence, one of the camp kitchens and squads of men taking their daily exercise.

The men could only continue basic training in the camp so it was important to keep them physically fit before they went forward ‘into the line’.

The Frensham camp opened in the spring of 1918 and, being entirely under canvas, was not suitable for winter occupation. So a new, largely hutted camp was set up at Rhyl in North Wales – better positioned, too, to receive the troops disembarking from the ships at Liverpool where the majority of the troop ships arrived.

This led to the end of the use of Frensham Common for military camps of such a scale and to it beginning to become the pleasant open space where those of us fortunate to live within walking distance can take our daily exercise today.