Brightwells campaigners get their day in High Court 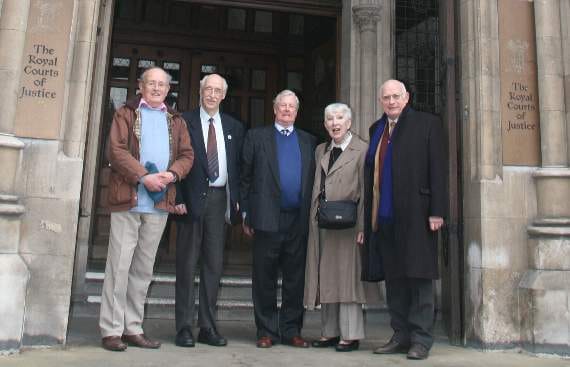 THE future of the Brightwells regeneration scheme hangs on the decision of a High Court judge this week after a judicial review claim against Waverley Borough Council’s long-delayed plans to transform a run-down part of Farnham town centre reached the Royal Courts of Justice.

A preliminary hearing was opened by Mr Justice Dove on Tuesday, to test the legal standing of five claimants attempting to block the most recent revisions to Waverley’s development agreement with construction partner Crest Nicholson, agreed by the council’s executive last May.

It closed shortly before 5pm, and the judge is now expected to weigh up each argument before announcing his decision on whether or not to allow the case to proceed to a full judicial review hearing later this year.

Should the claimants win their case it would likely force Waverley to re-tender the scheme, while conversely should Waverley win Crest Nicholson recently expressed its intention to begin construction of the main development “within three months” of the decision.

Each of the five claimants - David Wylde, Richard and Celia Sandars, and Waverley councillors John Williamson (Farnham Residents) and Andy MacLeod (independent) - were present in the public gallery on Tuesday, as were Janet Radley and David Howell of the Farnham Society, and Farnham Residents’ party leader and long time anti-Brightwells campaigner Jerry Hyman.

Central to the claimants’ challenge, as set out at the High Court, is that the proposed amendments to Waverley and Crest’s development agreement “would result in a contract which is materially different from the original contract (signed in 2003)” - with particular emphasis on a drop in the minimum land value of Waverley’s land to just £3.19m from the £20m originally estimated.

This, the claimants submit, requires Waverley to re-run an open competition for the Brightwells tender in accordance with EU procurement legislation - citing the case of Winchester City Council’s Silver Hill development which was scrapped after a similar High Court challenge by a solitary councillor Kim Gottlieb in 2015.

Waverley’s barrister Mr Coppel QC challenged the claimant’s right to a judicial review on Tuesday, however, arguing that EU procurement law allows only for “economic operators” to challenge public or privately-awarded contracts - and even then only if they can prove they have been “directly affected” by any revisions to said contract.

He pointed out that no ‘economic operators’ have yet challenged the multitude of revisions to the Brightwells contract over the past 14 years, and emphasised the lack of evidence that re-running the tender process would result in a different outcome - adding the council remains “satisfied” that its contract with Crest Nicholson represents the best value for money for taxpayers.

Mr Coppel QC accepted the judge’s view that “a judicial review enables people to bring forward a challenge where otherwise they wouldn’t have been able to”. But “in the context of this case” he accused the claimants of deliberately manipulating legislation designed to promote free trade among EU member states in the pursuit of “ulterior motives”.

He pointed to the difference between having a genuine interest in having procurement decisions taken in an “open and fair manner”, such as the councillor in the Silver Hill case, and those seeking to apply for judicial review “for political motives”.

Continuing his argument, Mr Coppel highlighted the claimants’ long-held objections to the Brightwells scheme - commenting that Mr Wylde, Mr and Mrs Sandars and Mr MacLeod all “represent associations which have have been implacably opposed to this development from the start”, adding Mr Williamson was elected last year “on a platform of opposition” to Brightwells.

“As with any large development of this nature, the legal process goes through various different stages,” he told Justice Dove.

“At each stage the claimants and others have objected to this particular development, and what comes before you now is simply their latest stage of objection against this development.

“The claim has nothing to do with the underlying purpose of the regulations. Our submission is that the primary concern of the claimants is to stop this particular development and put a spoke in the process.”

Mr Justice Dove cautioned against confusing “motives” with “interest”, however, commenting “there are numerous examples where motives have nothing to do (with the claim)…that doesn’t mean they are not interested in proceedings”.

In the afternoon session, the claimants’ barrister Mr Smith responded to Mr Coppel’s comments on the limited jurisdiction of the High Court, and talked about the dangers of a “restrictive approach on situations which take private transactions into public law, where the public has an interest in ensuring the powers of the courts are correctly deployed”.

He also addressed the need for “clear and explicit language” where somebody was seeking to oust the jurisdiction of the courts, and criticised the “unwarranted allegation of ulterior motive”.

Following the hearing, Mr Justice Dove will now prepare his judgement to be sent to each of the interested parties in draft form, before making the final ruling available in public. This process is expected to take around a fortnight.