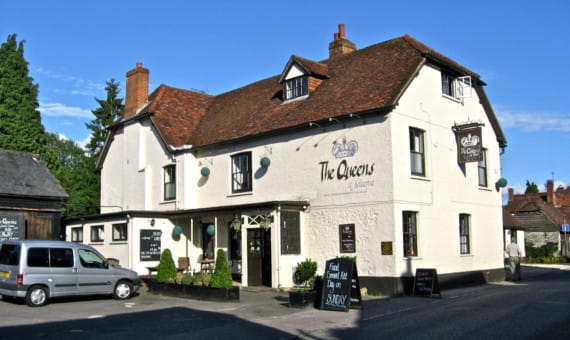 The pub sits in the centre of Selborne

THE Queens Hotel in Selborne has been reprieved by East Hampshire District Council’s planning committee.

Members voted 8-1 against a scheme to convert the High Street pub and its neighbouring barn into four homes, and to construct a fifth home in the grounds.

Council officers had argued that applicant Guy Macklin had satisfied planning regulations that required him to market the premises as a pub for a specified period to see whether the building had a future being used for that purpose.

Councillors said there had been "flaws" in the marketing process, particularly an "over-optimistic guide price" given to potential purchasers.

But despite this, they added the building’s long-term viability as a pub had to be considered: "Even with the building being sold at a substantial loss, an assessment of the trading potential of the public house indicates that it would not be realistic to expect a new owner to invest in bringing the pub back into use."

The public gallery of the council chamber at Penns Place in Petersfield was packed for the meeting on February 13, with many members of the Save The Queens group in attendance.

Cllr Minette Palmer, who chairs Selborne Parish Council, spoke in favour of retaining The Queens, which is not currently operating as a pub.

She said: "When the new owner bought The Queens in 2015, it was a going concern recently refurbished to the tune of over £300,000. But he bought it as a ’development opportunity’ - he said exactly that when he appealed against its Asset of Community Value status granted just a year ago.

"In 2016, he stripped out the new bedrooms and bathrooms, the bars, the restaurant. He gutted the place, so how could it be genuinely marketed as a pub when it had been stripped of its pub assets? Deliberately stripping a building and letting it deteriorate in the hope of getting permission to develop it shouldn’t override policies that protect a pub from being lost forever."

Caroline Rye - who chairs Save The Queens Ltd, which would like to buy the pub on behalf of the village - said the "overwhelming majority" of people in Selborne did not want it turned into housing. She added the hotel’s rooms had enjoyed 100 per cent occupancy at weekends, and 75 per cent during the week, before Mr Macklin took over.

Mr Macklin said a Selborne resident had claimed The Queens had been a "consistently failing enterprise" over the past 22 years. He said Selborne needed "appropriate housing" and that his application was a "sympathetic development to maintain and enhance the building".

He said protesters were "living in a past of nostalgic notions that are stultifying the future".

Ward councillor David Ashcroft said: "I would love to see it kept as a hotel with ten rooms, a wonderful restaurant and a wonderful bar, but I’m told it’s not viable."

Concluding the debate, Cllr Ken Carter told the committee: "I think you should give The Queens a fair chance and it’s time to listen to the community."