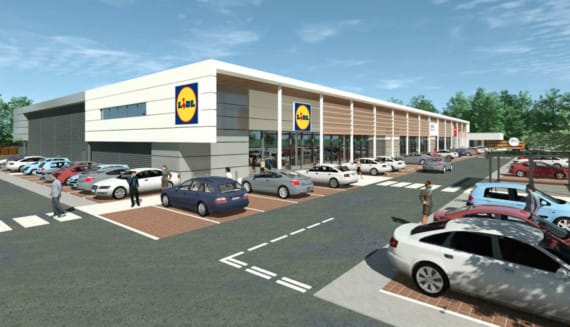 Officers recommended approval of a 4,327 square metres rectangular building to house Lidl, Home Bargains, two other retailers and a restaurant.

The plan by Hargreaves Properties Ltd was for an industrial site at the junction of Montecchio Way and Mill Lane which had been vacant for 20 years.

It went before the committee on August 26 because of the level of public interest in the plan, which the Herald revealed was scheduled to be heard behind closed doors in May. Councillors were in favour by ten votes to nil, with one abstention.

A total of 181 parking spaces will be provided - 103 fewer than recommended - which caused a debate.

Cllr Sara Schillemore said: "A shortfall of possibly 103 spaces will be a lot of aggravation. People go to supermarkets in cars. They don’t want to carry £140 worth of shopping back home every week, they want to put it in their car and drive home with it."

Ward councillor Suzie Burns added: "There’s simply not enough parking for the size of the units that are going to be developed."

Planning officer Matthew Harding said without evidence the parking was likely to be insufficient it was an "indefensible reason for refusal".

Cllr David Evans said those "most interested" in parking would be the occupiers, adding: "The last thing on earth that they want is not enough parking spaces because if that were to happen then people would drive in and drive straight out again."

Alton town councillor Paul Crossley said he was "pleased there is a development going on this brownfield site" but wanted a cycle path to Eggar’s School.

Ten per cent of the building’s power will come from solar panels and there will be four electric car charging bays. The applicant, whose agent Simon Hawley said it was a "high quality retail scheme that will create jobs and investment in the local area", will pay a £500,000 Community Infrastructure Levy.

Cllr Burns said the site was an "eyesore". Cllr Graham Hill said: "The general public, reading from the comments on the website, are very keen for this application to go ahead. They’re very much in favour of it."