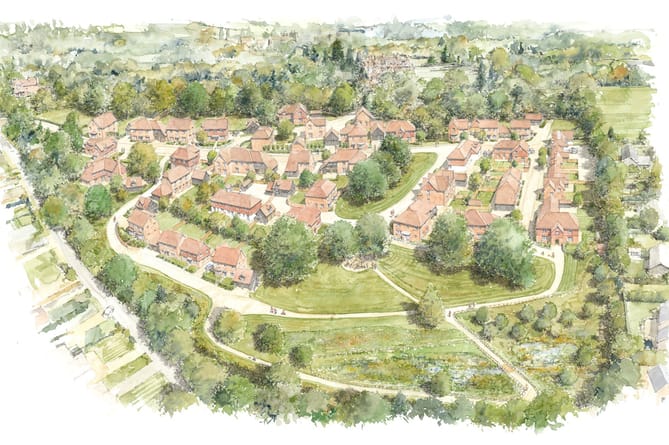 An artist’s impression of the proposed ‘Scotland Park’ development

It represents another blow to Waverley’s under-seige planning department, and is a further sign that the floodgates are now open to speculative development across the borough.

The borough council delayed ‘Part Two’ of its Local Plan housing blueprint last year to remove Red Court as a strategic housing site, in favour of a new housing site at the Royal Junior School in Hindhead.

But it seems the delay has backfired, after a second inspector in a month ruled Waverley will not be able to hit government housing targets over the next five years by relying on the sites identified in its Local Plan alone.

For its Local Plan, and by extension the borough’s community-led neighbourhood plans, to hold sway, Waverley must be able to provide evidence of a five-year housing land supply.

However, in allowing the Red Court appeal, Inspector Helen Hockenhull ruled the borough only has a 4.25 year supply – reinforcing the ruling of another appeal inspector just weeks earlier.

Insp Hockenhull acknowledged that the Red Court development would have a “major adverse impact” on the character of the site and an Area of Great Landscape Value.

But she adjudged that as Waverley is not currently able to demonstrate a deliverable five-year supply of housing, this harm to the environment would not “significantly and demonstrably outweigh the benefits of delivering market and affordable homes to meet identified need for housing”.

In a statement, a Waverley spokesman hit out at the decision, which “goes against the wishes of hundreds of objectors from the local community and conflicts with the aims of both the borough council and Haslemere Town Council to direct new development to existing urban areas or previously-developed land”.

And Councillor Liz Townsend, Waverley’s portfolio holder for planning, said the decision will result in “real harm to the character and beauty of this greenfield, countryside site”, as well as going against the Haslemere Neighbourhood Plan – “the culmination of years of hard work from the community in Haslemere”.

Cllr Paul Follows, Waverley leader, added the ruling was “yet another example whereby the residents of Waverley have been let down by the current national planning system”.

But deputy leader of the council’s Tory opposition, Cllr Carole Cockburn, blamed the “totally unnecessary delay in the production of Local Plan Part Two”, to remove the Red Court site from the Local Plan and replace it with the Royal Junior School site.

She said: “The Inspector not only found the Red Court site sustainable and deliverable, but repeated what many of us have said over recent months.

“The Royal School site sits in the AONB, is not an edge of settlement site and is only partially previously developed.

“The Local Plan inspector will have to determine whether it is a suitable location for residential development or not.

“In the meantime, the whole of the borough will be penalised for the breath-taking incompetence of this administration.”