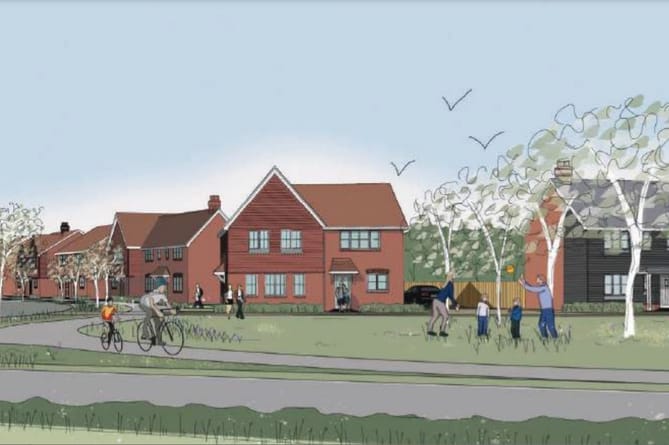 WAVERLEY Borough Council has launched a legal challenge against a planning inspector’s ruling blamed for putting the borough’s countryside at risk of development.

The council’s planning committee refused permission to build 99 homes on an undeveloped field in the village of Alfold.

But last month this was overturned by the inspector, who ruled more housing sites are needed across Waverley to meet government targets.

Now, the authority has announced it will challenge the appeal ruling in court.

“It is very disappointing that an inspector can allow permission for a development of this size in a rural area, without giving due consideration to our adopted policies or to national policy on sustainability.

“We have taken legal advice and we believe we will be able to make a robust case that the inspector has erred in law in his decision-making.

“We feel we must challenge this ruling and defend our communities from overdevelopment.”

Inspector Harold Stephens said Waverley did not have enough deliverable sites to provide five years worth of housing.

He said the council had just four years supply, a shortfall of about 885 dwellings.

But the council maintains it does have enough and believes that in reaching his overall conclusions, the inspector “either misapplied or misinterpreted key adopted policies in the development plan, as well as the national policy on sustainability”.

Thakeham Homes Limited is now allowed to build a mix of one to four beds, including 30 affordable, with 205 car parking spaces on the Springbok Estate west of Loxwood Road.

Officers recommended the application for refusal a year ago, saying it was “of substantially excessive scale for the location” and unsustainable as it would “result in undue reliance on private vehicles and limited access to local services”.

Cllr Townsend added: “Alfold clearly cannot take development at this level as there simply isn’t the infrastructure or local services to support it.”

The inspector said the site was a reasonable 50 minute commute by bus to Guildford, and the developer was contributing £400,000 towards a demand responsive bus service.

The borough council’s planned allocation of 125 homes in Alfold by 2032 has been exceeded already – in fact recent consents means the village will double in size.

But the inspector said 125 was a minimum – part one of the local plan, approved in 2018, did not impose a cap on the number to be built in Alfold.

He said: “In my view, the number of homes in Alfold that would arise from adding this appeal scheme to the existing completions and

commitments is neither “excessive” nor “disproportionate”.”

Around 77 per cent of the Waverley borough is designated as Surrey Hills Area of Outstanding Natural Beauty or Area of Great Landscape Value and 61 per cent lies within the green belt.

The Alfold site is in neither so, despite being greenfield land, Mr Stephens said it was “therefore of notably lower value and sensitivity than most other parts of Waverley”.

Liberal Democrat council leader Paul Follows said: “We work very hard to get our local plans in place, to allocate sites in areas where homes are sustainable and needed, and to approve planning permissions for suitable new housing.

“There are more than 5,000 existing permissions for new homes, but as yet, more than half have not yet commenced.

“It is a clear failure of the current planning system, that once we have granted planning permission, the council, as local planning authority has no ability to influence the delivery of homes – and that local communities are entirely dependent on the goodwill of property developers to build out the homes, in order to protect them from more speculative and inappropriate development.

“National planning policy, set by the UK government, continues to allow developers to effectively bypass local plans, water down their obligations to provide genuinely affordable and social housing and to put huge strain on local infrastructure.

“The only people benefitting from this system are the property developers.”

Part two of Waverley council’s local plan, which lays out how the borough should be developed and is used to help decide planning applications, was submitted for examination on December 22.

The inspector said as such it is “at a very early stage” and “therefore has limited weight at the present time”.