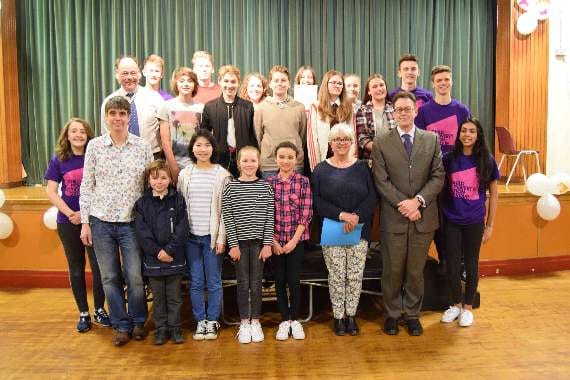 RODBOROUGH School held a poetry competition to raise funds for the Child Poverty Action Group. The evening was organised and run by the school council in support of their chosen charity for the year.

Special guest Geoff Allnutt, aka The Speech Painter, who has been a performance poet since 1988, opened the event with two of his compositions and then acted as chief adjudicator.

Geoff has performed all over the UK from poetry clubs to music and literature festivals and is the winner of numerous poetry slams including at Glastonbury festival.

There were 15 performances by students and staff from the Milford school. Many were recitals of familiar poems, such as Wordsworth’s Daffodils or Maya Angelou’s And Still I Rise. A number of performers also braved their own contributions, including the commended Angel H-S’s The Faults of Life, which she performed on the night with Maisie R.

The judging panel declared Poppy C the winner of the upper school prize for her performance of Harry Baker’s Prime Numbers. Zach P took the prize for the lower school with his rendition of The Tale Teller by Josiah Brooks.

Headteacher Matthew Armstrong-Harris joined Geoff Allnutt in praising all of the performances. He said he was “proud of the achievements of the school council and the senior six team for devising and organising the event”.

The Poetry for Poverty event raised more than £700.