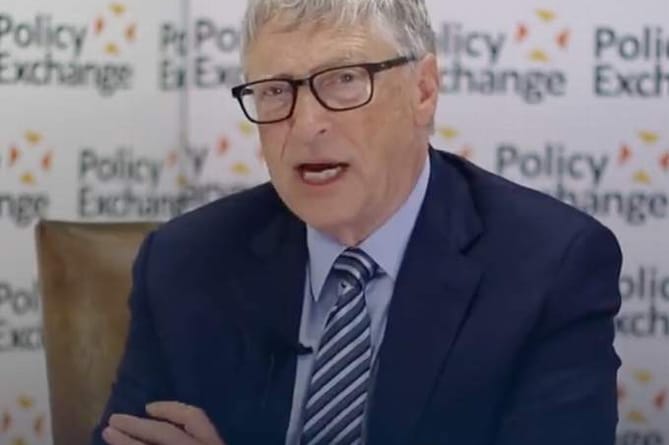 WHEN I was a cabinet minister I had one golden rule: don’t ask whether a policy is popular today, but how it will look in five years’ time.

In other words, ministers should focus on making changes that will stand the test of time.

That approach stood me in good stead: my focus on improving the safety and quality of care in the NHS for example meant there were 40,000 more clinicians (including 14,000 more nurses) by the time I finished as well as a big increase in the number of hospitals rated good or outstanding.

Whilst I am sure I did not get everything right, that focus on safety and quality has remained in the NHS to this day so it was the right thing to do.

How should we apply the same approach to climate change?

Trying to brand COP26 in Glasgow, which I negotiated for the UK to hold when I was Foreign Secretary, as a ‘success’ or ‘failure’ is the wrong starting point.

Ahead of COP26 I interviewed one of the wisest voices on climate change, Bill Gates, about what needs to happen. He said it is very simple: humankind needs to reduce the 51 billion tonnes of greenhouse gases that we emit annually to zero.

Small changes matter – 4 degrees warmer and crocodiles will be swimming around the North Pole and 6 degrees cooler would mean a new ice age.

So holding the rise in temperatures to 1.5 degrees matters, but a rise of 1.8 degrees is still better than a rise of 2 degrees – so we need to ‘sweat the small stuff’.

That means finding a way to eliminate carbon from electricity generation, including nuclear power if necessary, as well as investing in science to find a carbon-free way of manufacturing cement (or dealing with the methane that comes from the backsides of cows).

Bill Gates said that Britain’s performance on climate change was exemplary. The independent Climate Change Performance Index ranks us as second only to Sweden globally.

Of course I am proud of what Conservative governments have achieved – most recently the massive growth in the use of wind and solar under the Coalition government and becoming the first ever government to legislate for Net Zero under Theresa May.

But the reality is that progress has been possible because of cross party support going right the way back to Margaret Thatcher, the first major world leader to address the issue when she made her famous speech to the Royal Society in 1988 talking about ‘creating a global heat trap which could lead to climatic instability’.

John Major continued the campaigning at the Rio Summit of 1992; Tony Blair put the UK’s formidable diplomatic weight behind negotiating the Kyoto Protocol and Gordon Brown passed the Climate Change Act of 2008 which made the UK the first country to legislate a legally binding framework to tackle climate change.

Each of these leaders added to the momentum for change, just as Boris Johnson has for example by saying that new petrol and diesel cars will not be sold after 2030.

The difficult question to answer is whether collectively we are doing enough – to which the answer is almost certainly no.

A lot hangs on whether China, the world’s largest emitter, is willing to play its part in a period of heightened global tensions.

But we should not reject limited progress as no progress. The diplomat I learned most from as Foreign Secretary was Dr Henry Kissinger, who famously said that diplomacy was the ‘patient accumulation of partial victories’.

In this case too despite the urgency, patience will also be necessary – but that does not mean victory is impossible.