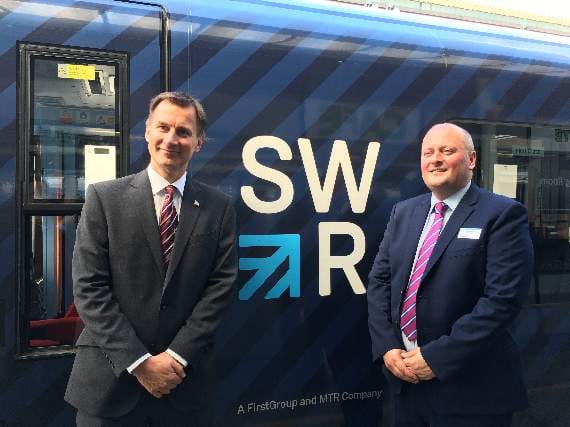 THE starting gun for the Tory leadership race has been fired in Haslemere, after foreign secretary Jeremy Hunt confirmed his bid to replace outgoing prime minister Theresa May while attending the Haslemere Festival on Friday (May 24) morning.

Mr Hunt, the MP for South West Surrey, is currently the fifth favourite to become Britain’s next prime minister, with most bookies pricing him at around 10/1 – behind the overwhelming favourite Boris Johnson, Dominic Raab, Michael Gove and Andrea Leadsom.

The former health secretary and married dad-of-three discovered the news at Guildford station, where he was celebrating the resumption of direct Farnham rail services

And in a dramatic announcement shortly after Theresa May announced her resignation, Mr Hunt confirmed during his next engagement at the Haslemere Festival that he would be standing as a candidate.

The MP announced his candidature to a packed audience at his ‘political update’ talk at the festival at 11am - his first public engagement after the news broke, saying it was “only right that my party constituency should be the first to know”.

He also took the opportunity to pay tribute to Mrs May in an exclusive interview with the Herald (see below) as “someone with the strongest sense of public service than anyone I’ve ever known”.

And later posted on Twitter: “I want to pay tribute to the PM today. Delivering Brexit was always going to be a huge task, but one she met every day with courage & resolve.

“NHS will have an extra £20bn thanks to her support, and she leaves the country safer and more secure. A true public servant.”

Damian Hinds, the MP of neighbouring East Hampshire and education secretary, has also paid tribute to the outgoing prime minister, adding: “The Prime Minister has shown an incredible commitment to public service with a great sense of duty.

Full story in next week’s Herald.