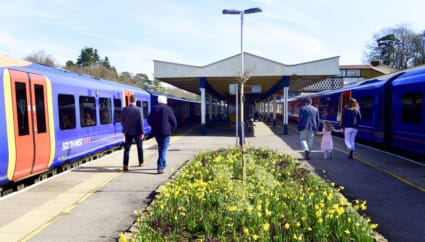 COUNCILLORS and trade union bosses have challenged South Western Rail’s rationale that significant cuts to rail services are essential to cope with a drop-off in rail usage.

South Western Railway (SWR) has estimated just 60 per cent, at most, of pre-pandemic commuters will return.

And while much of its network will maintain May 2019 service levels, some services are facing significant cuts from December 2022.

No cuts to services on the Alton to London Waterloo line have been announced.

But the Waterloo to Portsmouth line, calling at Haslemere, Liphook and Petersfield stations, faces cuts to both peak and off-peak services.

This is despite inflation-busting ticket price increases under the strike-hit SWR franchise - resulting in Haslemere, Liphook, Petersfield, Farnham and Alton all being named among the least affordable UK commuter towns last year.

Responding to the cuts, the RMT rail union has demanded answers from the government, Network Rail and SWR after claiming the research that shaped proposals to cut services from December 2022 was flawed.

According to the RMT, the operator used market research of passengers conducted at the height of the Covid-19 pandemic to make projections for future passenger demand across the SWR network.

The union has discovered the market research in May 2020 during the first lockdown, October 2020, as the second wave of Covid-19 hit, and in January 2021, immediately after the second national lockdown, were carried out when the government was instructing passengers to avoid rail travel.

RMT also claims a detailed study by Network Rail on the future of South West Mainline services, published in July 2021 showing an increased need for SWR services, has been omitted from SWR’s consultation.

RMT says this new evidence brings the consultation into disrepute.

Cllr Matt Furniss, cabinet member for transport and infrastructure, said he had relayed concerns to SWR over "the accuracy of their forecasting", in a meeting also attended by the MPs Chris Grayling and Sir Paul Beresford.

He added: "They were reluctant, as I fully appreciate, as you don’t want empty trains just sitting waiting for an eventual use, just to have them on standby.

"But we were really pushing so they had to have a very flexible approach if their forecasting turns out to be incorrect."

Councillor John O’Reilly said: "Everything implicit in our Local Transport Plan is to get our residents as much as we can without nagging them out of their car into public transport. And here SWR are - at peak times for heaven’s sake - as well as at leisure times, proposing to reduce services."

Take part in the consultation online via the link https://tinyurl.com/6c8rrer8 until September 19.