Saint’s alive in our town as George slays dragon 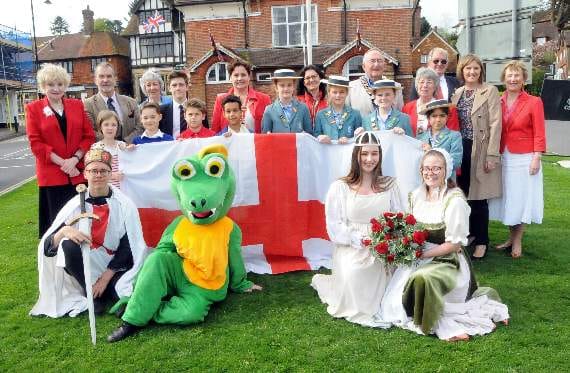 Pulling out all the stops, the Haslemere branch of The Royal Society of St George (RSOSG), ably assisted by Woolmer Hill School senior pupils dressed as England’s patron saint, his damsel, his handmaiden and the dragon.

Joining them, were pupils and teachers from RSOSG affiliated schools, Camelsdale and St Ives.

A small group of members then accompanied St George and his motley crew to visit pre-schools and nurseries to re-enact the dragon slaying and tell the story of his tribulations.

Mrs Gray said: “Our dragon was skilfully slayed many times by enthusiastic three-year olds and delightfully hugged a lot too.

“The party then handed some 200 red roses out to members of the public throughout Haslemere wishing them a ‘Happy St. George’s Day’ and raising more than a few smiles.

“Woolmer Hill pupils took on what could be considered a daunting task with enthusiasm and great warmth. The dragon was a particular success with the young children.

“The festivities concluded with the mayor and myself judging the town’s window dressing competition.

“Haslemere always rises to the occasion and the children from all three schools were a credit to the town and their individual schools.

“Those that entered the window dressing competition did so with an immense amount of thought and effort, and to top the day off we had a new prince born on St George’s day. What more could we wish for?

“I do hope Haslemere’ s St. George’s Day celebrations will continue to grow, and more and more people will take part year on year.”

Woolmer Hill headteacher Clare Talbot said: “We are always delighted to assist with the Royal Society of St. George’s celebrations. Our pupils have been involved for a number of years and have found the experience extremely rewarding.

“We look forward to seeing who will be St George next year, I understand this year’s performances will be hard to beat, but I know our students enjoy a challenge and will, I am sure, rise to the occasion once again.”

Rainbow Nursery at St Stephen’s Church not only enjoyed a visit from St George, but also celebrated the opening of their new log cabin.

The church raised funds to build the cabin, which will be used as a quiet space by the nursery during the week and for St Stephen’s youth activities in the evenings and at weekends.

Manager Kim Windebank said: “As well as celebrating St George’s Day, we are also celebrating British Values this week and the importance of being kind and tolerant.

“We had a lovely visit from St George and members of the Haslemere branch .

“The cherry on the cake was to see two ex-Rainbow members again. Daniel, who was St George, and Tom, who shared being the dragon, both went to Rainbow with my son.”

On Saturday, Mr Carter and his wife Sandie, joined a group from Haslemere RSOSG and parents, pupils and principals from the affiliated schools, Camelsdale and St Ives, to take part in the Cenotaph Ceremony and Cadet Parade in London on Saturday.

Wreaths were laid by Mrs Gray, pupils of both schools, and by Corporal Gray of 1268 Squadron Haslemere ATC, and the group attended a further ceremony in Westminster Abbey at The Tomb of the Unknown Warrior.