Storm can’t keep Guns Blazin’ away from The Cube 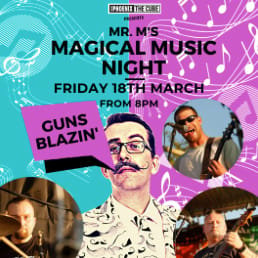 LOCAL rockers Guns Blazin’ will be playing in The Cube at The Shed in Bordon from 8pm until 10pm on March 18 as the stars of Mr M’s Magical Music Night.

But having checked his fence panels and roof tiles, Stuart said: “You can’t stop the rock; we may have had to postpone it but it’s back.

“It’ll be a stompin’ good night of classic rock covers and it’s a great night out for guests, who can also enjoy a drink and a burger for a properly good rock ‘n’ roll party night out.”

The free event is being produced in conjunction with The Phoenix Theatre and Arts Centre, whose director Rob Allerston said: “We have a variety of events for all tastes planned throughout 2022 at The Cube, within the Town Park and in our newly refurbished Phoenix Theatre.

“Our goal is to have a co-ordinated programme within the new town, at the current venues and at the planned event spaces when they open, to provide Whitehill & Bordon with a full programme of cultural, artistic and entertainment events.”