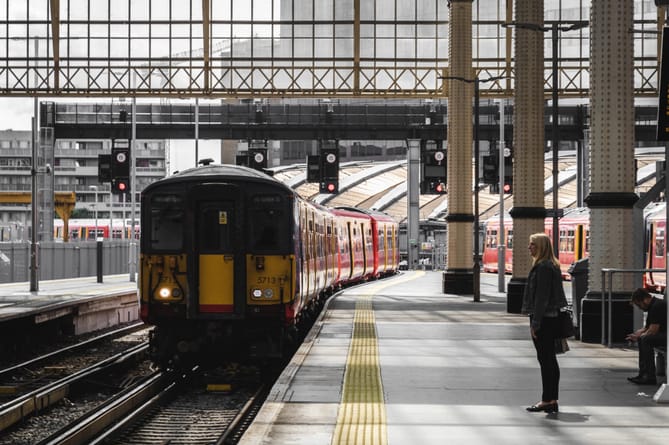 A rail union has been accused of “relishing the chance to ‘shut down’ the network” to the detriment of passengers by the SWR Watch passenger watchdog.

Members of the Rail, Maritime and Transport union (RMT) have voted in favour of industrial action across the UK’s railway network on June 21, 23 and 25.

The union says more than 50,000 railway workers will walk out as part of three days of national strike action, making it the biggest dispute on the network since 1989.

The RMT says strike action has come about due to the inability of the rail employers to come to a negotiated settlement with RMT.

However, SWR Watch has slammed the union’s decision at a time when the railways, and commuters, are still recovering from the Covid-19 pandemic.

It has also blamed the RMT, in part, for driving up ticket prices – and has called on the union support a transformation of the UK’s rail infrastructure.

“The railways are still recovering from lockdowns, changing work patterns and a corresponding drop in income.

“The government and taxpayers have helped to protect jobs and services within the industry, but clearly, this cannot continue forever without reform and modernisation.

“We’re often told that strikes are a last resort, yet General Secretary, Mick Lynch, appears to be relishing the chance to ‘shut down’ the network, seemingly indifferent to the impact this will have on passengers.

“While many of our followers may disagree with my position on this planned industrial action, there is almost universal agreement that the government must do more to energise the sector post-Covid.

“Rail has to potential to transform our transport infrastructure, moving away from an unsustainable reliance on private cars to cleaner, greener modes of travel.

“Greater investment and certainty of funding are needed to capitalise on the changing political landscape and public awareness of environmental matters.

“Such a policy would bring more jobs, more services and lower fares.

“Yet, train travel is currently too expensive, and the unions must accept some blame for this.

“Their leaders are regularly harping on about excessive profits and the need for full renationalisation, yet the simple, inconvenient truth is that the operational costs of the industry need to fall.

“How much more must passengers pay to meet the RMT’s current demands?

“Where do they think this money is coming from if not us?

“Staff should be paid fairly, and the cost of living crisis is of concern to us all.

“But my message to striking rail workers is this; preventing those who rely on a functioning train service from making a living themselves is not the way to make your point.

“Retailers, those travelling to school, college, university, or seeing loved ones are not to blame yet they are being targeted by your action.

“I’d also urge the RMT leadership to get back to the negotiating table and to do so in good faith.  Striking is a sign of failure on all sides, not cause for celebration.”

It comes after the RMT said in a statement announcing the national strike action: “Network Rail and the train operating companies have subjected their staff to multiyear pay freezes and plan to cut thousands of jobs which will make the railways unsafe.

“Despite intense talks with the rail bosses, RMT has not been able to secure a pay proposal nor a guarantee of no compulsory redundancies. In a separate dispute over pensions and job losses, London Underground RMT members will take strike action on June 21.”

Following the announcement of industrial action dates by the RMT union, South Western Railway (SWR) has said its services will be “significantly affected” between Tuesday, June 21 and Saturday, June 25.

SWR is working closely with Network Rail and other train operators to finalise a significantly reduced timetable for those dates, but is warning customers to expect severe disruption on days impacted by industrial action.

With Network Rail signallers and more than 2,100 SWR RMT members taking industrial action, it is likely that significant parts of the South Western Railway network will be unavailable for travel on those dates. Where routes are open, it is likely that far fewer trains will run than normal.

As a result, customers are urged to change their travel dates if they can and, for those who have to travel on those dates, to begin looking for alternative methods of transport.

SWR teams are also working to update hospitals, schools, airports and businesses across the network on what this will mean for them.

Claire Mann, managing director of South Western Railway, said: “I understand that the announcement of upcoming industrial action will worry many of our customers, particularly against the backdrop of significant cost of living pressures.

“We are carefully finalising contingency plans, but I’m afraid this action will mean that many customers will be unable to travel by rail.

“If customers can change their date of travel, or make alternative arrangements, I urge them to begin making those arrangements as soon as possible.

“I appreciate how challenging this may be and would like to thank customers for their patience as the rail industry responds to this unprecedented industrial action.”

SWR will publish details of its reduced timetable when finalised and customers should check the website for latest updates: https://www.southwesternrailway.com/industrial-action.

Rail union RMT said in a statement announcing the national strike action: “Network Rail and the train operating companies have subjected their staff to multiyear pay freezes and plan to cut thousands of jobs which will make the railways unsafe.

“Despite intense talks with the rail bosses, RMT has not been able to secure a pay proposal nor a guarantee of no compulsory redundancies. In a separate dispute over pensions and job losses, London Underground RMT members will take strike action on June 21.”

RMT general secretary, Mick Lynch, added: “Railway workers have been treated appallingly and despite our best efforts in negotiations, the rail industry with the support of the government has failed to take their concerns seriously.

“We have a cost-of-living crisis, and it is unacceptable for railway workers to either lose their jobs or face another year of a pay freeze when inflation is at 11.1 per cent and rising.

“Our union will now embark on a sustained campaign of industrial action which will shut down the railway system.

“Rail companies are making at least £500m a year in profits, whilst fat cat rail bosses have been paid millions during the Covid-19 pandemic.

“This unfairness is fuelling our members anger and their determination to win a fair settlement.

“RMT is open to meaningful negotiations with rail bosses and ministers, but they will need to come up with new proposals to prevent months of disruption on our railways.”