What more can be done to save pond from devastation? 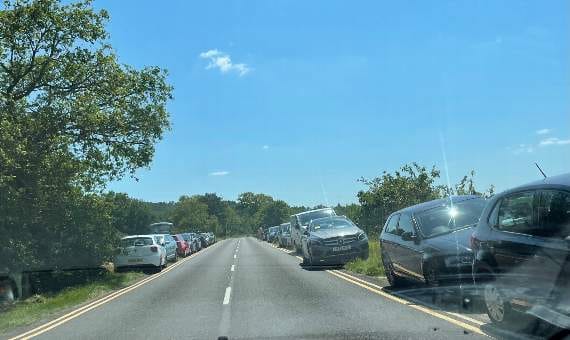 Cars parked on the verges

FRENSHAM Great Pond and its rare heathland faces devastation – and the authorities charged with its protection are at a loss to know what else can be done to avoid an environmental disaster.

After another weekend in which hot weather drew day-trippers in their thousands to the beauty spot and priceless habitat, councillors and residents have expressed their despair at the escalating problem.

Numerous steps have been taken to tackle problem parking on surrounding roads, and another 25 fixed-penalty notices were dished out at the weekend.

But as expressed by a Waverley council spokesman this week: “People just don’t seem to care about getting a fine, as long as they can get to Frensham.”

But once again, many more hundreds of motorists chose to take their chances on the surrounding lanes and A287 – ignoring the freshly-painted double yellow lines, and signs warning of rural clearways in Bacon Lane and Pond Lane, driving up banks and flattening verges, and restricting access to emergency vehicles.

Council traffic wardens were in operation, but faced a long walk – with one local resident spotting two parking wardens forced to park at St Mary’s Church, more than a mile from the pond’s main car park.

There were also reports of “boy or girl racers roaring at the Bacon Lane junction”, prompting renewed calls for a greater police presence.

And the day-trippers again left behind a huge amount of litter – all ten of the pond’s 1,100 litre bins were filled to overflowing while council and volunteer litter pickers collected around 30 bags of litter from the beach, car park and at the foot of the bins.

But she conceded these have only been “partly successful” and recognised “there is still a lot of work to do”.

Additional enforcement officers and car park marshals have been brought in to support rangers.

And Cllr Townsend said the stakeholder group is investigating “other parking measures” on roads around the site.

She continued: “My advice remains, if the car park is full the site is full, please come back another day when you are able to appreciate the surroundings more.

“Don’t leave litter, and do not under any circumstances light fires or barbecues as they are prohibited for a very good reason.

“Finally, I would ask all visitors to treat all staff on site with respect – this is unfortunately not the case at the moment.”