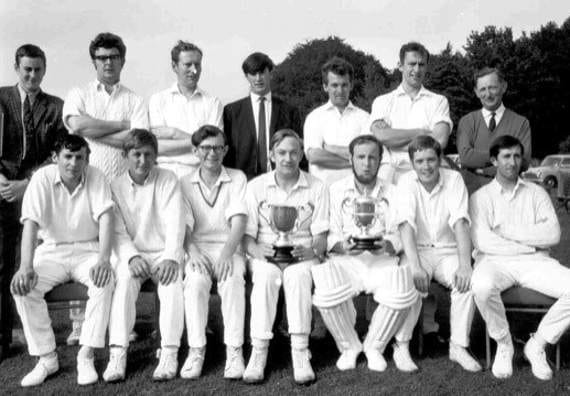 GEOFF Tribe, who served Grayshott Cricket Club so well both on and off the field, has passed away. He was 80.

Geoff started playing for Grayshott in the late 50s, but National Service and several house moves involving his work in banking interrupted his playing career at the village club.

He led Grayshott to win the I’Anson Cup in 1969, the first time in 40 years. The Shotts lost just one game that season when they were also the first club to win the Stevens Cup.

Geoff was an influential figure in winning both trophies as a captain and a player.

He would regularly open the bowling, but featured strongly with both bat and ball, and was arguably the best bowler in the league taking hundreds of wickets and was regularly selected for the I’Anson Representative XI.

In 1964, Geoff took 9-11 against Wrecclesham, including four wickets in as many deliveries, and went on to make it six wickets in just eight balls!

In 1969, one of his best performances with the ball was against a full Hampshire XI when he took two of the first three wickets and reduced them to 17-3 in his opening spell, including the wicket of Gordon Greenidge, not a bad wicket to get.

In the 60s, Grayshott also had a full Sunday fixture list against some strong sides and Geoff often opened the batting and the bowling in those games. The team would travel by coach to these matches, which were great fun for the players as after the game everyone had enjoyed a drink or two!

Geoff was also a capable batsmen, scoring many runs for Grayshott, and was the first name to appear on the Hunter’s Moon 1st XI Batting Cup in 1966.

When Geoff’s career took him away from Grayshott he enjoyed his cricket with Claverham Cricket Club, near Bristol, and with St Ouen Cricket Club in Jersey, where Geoff also represented Jersey over-50s in Barbados and South Africa.

He also introduced his son Mark to St Ouen Cricket Club and went on to play many years for the club.

Geoff’s leadership skills were ideal for a captain, remaining level headed and calm, and it was no surprise that in 1997 Geoff became president of Grayshott Cricket Club – a role he retained until 2015, overseeing quite a transformation at the club, especially with the growth in cricket played at Grayshott at all ages and levels.

At the club’s annual dinner dance, Geoff’s speeches were always one of the highlights, reflecting his dry sense of humour.

In recent years, Geoff was a regular at the sports field on a summer Saturday afternoon following the fortunes of his beloved club. His wit and wisdom was shared with everyone, particularly in the bar after a game.

He was so well respected by his peers and the younger generations, who never got the opportunity to see him play.

Geoff is pictured (front centre as captain) with the 1969 I’Anson Cup-winning side.