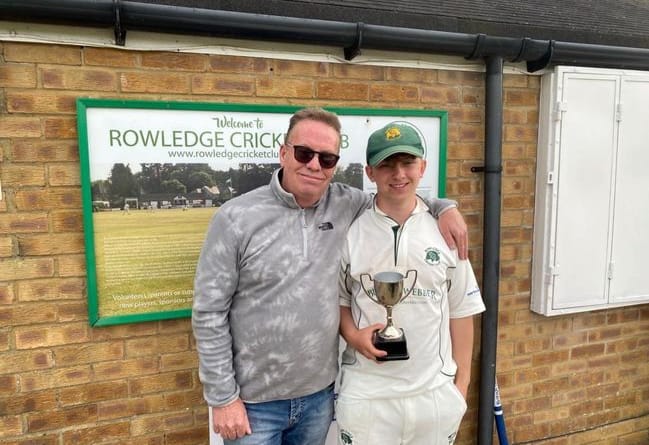 Rowledge man of the match Ryan Littlewood with Simon Reed, landlord of the award sponsors The Sandrock Pub and Take Away (Tindle )

Rowledge continued their excellent start to the Division 1 season with a 19-run victory in a tense affair at home to Calmore Sports.

They have now won four of their opening five matches.

After winning the toss and electing to bat, Rowledge got off to a disastrous start, losing South African Ash-Lee Harvey in the first over.

Jake Wish looked to be positive in response, striking a series of boundaries – but he also soon departed.

On a slow pitch and against a bowling attack of nagging accuracy and no real pace, the Rowledge batters were struggling to score with any freedom and at the midway point of the innings had lurched to 57 for four.

Opener Ricky Yates remained at the crease and fought hard for Rowledge, though not at his fluent best. He ground out the opening spell of the impressive Steve Wright, and was quick to punish any width on offer, before eventually falling for an important 54.

However, crucially for Rowledge, the promising Ryan Littlewood was steadily keeping the scoreboard ticking over.

He was cautious early in his innings, but in his typical fashion ran excellently between the wickets and accumulated runs at a good rate, before launching an attack which included a particularly long maximum over the recreation road off Liam Carty.

Littlewood showed great maturity in tough circumstances and, in the context of the match, his 48 runs would prove decisive.

Richard Forbes provided a stable partner for Littlewood, and delivered some late-innings fireworks to drag Rowledge up to a total that, though perhaps under par, they were confident they could defend.

Calmore’s response got off to a steady start, reaching 37 before Ollie Baker removed opener Will Brewster, caught behind by Ben Wish.

This brought together the experienced pair of Mark Lavelle and the prolific Ben Johns, who looked to build a partnership.

The Rowledge bowling attack stuck to their plans of tight line and lengths and, alongside their exceptional fielding, they restricted Calmore’s scoring options and the pressure soon built.

Eventually, the crucial breakthrough came, with Johns smartly caught at mid-wicket by David Lloyd off the bowling of Littlewood.

Shortly afterwards, Yates removed the aggressive Shawn Johnson, and there was then a flurry of three wickets in two overs for Baker, including Lavelle, which suddenly brought the game firmly into Rowledge’s control.

From this point Rowledge saw the game home, and continued to be relentless with their energetic fielding backing up some excellent bowling, notably from the spin attack which includes Harvey (two for 37) and the evergreen Lloyd (one for 18).

The star of Rowledge’s bowling effort, however, was Baker, who has been a consistent performer so far this season and produced exceptional figures of four wickets for three runs from his ten overs, including a remarkable seven maidens.

The tough challenges continue for Rowledge with a trip to Portsmouth today (Saturday) followed by their first outing in the Southern Premier League T20 Cup at home to Andover tomorrow (Sunday).