Team spirit is the key in Rowledge starlets’ win at Portsmouth 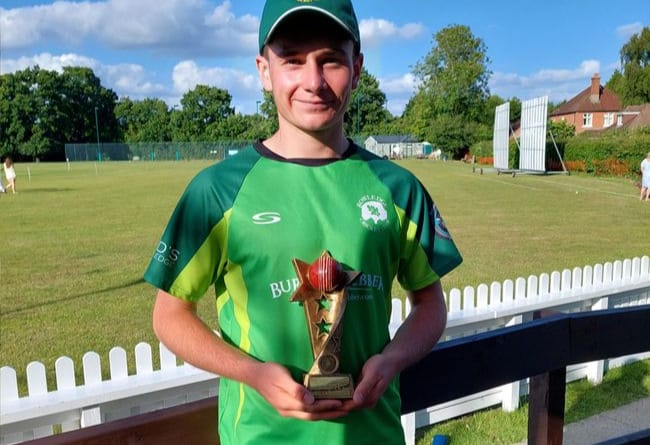 Rowledge extended their lead at the top of the Southern Premier League Division 1 after a thrilling 11-run win at Portsmouth – a victory which once again demonstrated the excellent character and team spirit in their young side.

After losing Sebborn to a calamitous run out in the second over, Jake Wish and Ricky Yates looked to build the foundations for Rowledge’s innings.

The pair looked comfortable and scored freely against the seamers, ruthless against anything wide or overpitched and guiding Rowledge to 83 for one, but perished in quick succession to the spin of Sri Lankan Minhaj Jalil.

This brought together Ash-Lee Harvey and Zac Le Roux, who again steadied the ship and built a strong partnership through the middle overs.

Le Roux was quick to punish anything short of length, dispatching a series of firmly- struck pull shots off the bowling of Rao and Wimble to give Rowledge’s innings some much-needed impetus.

He eventually fell to Rao for an exceptional 68, and was quickly followed by Harvey for a well-made 30.

This brought together Olly Ryman and Ryan Littlewood, who immediately put the pressure on Portsmouth with some aggressive running between the wickets and positive stroke play.

The hard-hitting youngsters scored at a rapid rate, striking some lusty blows and capitalising on some tired Portsmouth fielding with some very intelligent running between the wickets.

Ryman fell for a quick 34, while Littlewood continued his fine form of late, finishing with an excellent 43.

Rowledge had scored more than 100 runs from the final ten overs of the innings, propelling themselves to 269 for six, comfortably their highest score of the league season, and a total they would have felt confident about defending.

Portsmouth’s response got off to a strong start, with the danger man Ben Duggan and Marston both looking in fine touch.

The pair were particularly strong driving down the ground, and motored to 80 without loss before Rowledge got the breakthrough they desperately needed, with Duggan being adjudged LBW to Harvey just as he was looking set for a big score.

Rowledge stuck to their game plan and battled hard with their characteristically- energetic fielding, but they struggled to make further inroads and toiled as Mitchell and Marston continued to build Portsmouth’s run chase.

The game seemed to be drifting away from Rowledge, but Jake Wish returned to the attack and removed both Mitchell and the Sri Lankan Jalil in the same over.

With Wish bowling in tandem with Baker and Harvey, Rowledge began to string together dot balls, build some pressure, and the tide seemed to be turning in their favour.

However, the game then lurched back into Portsmouth’s hands when Marston and Daini struck a series of boundaries, capitalising on some rare loose overs by the Rowledge bowlers.

At this point, with Marston at the crease approaching an excellent century and Portsmouth needing less than a run a ball off the last five overs, the game looked all but over.

The major twist of the game would soon come, when Marston was clean bowled by Ryman attempting an audacious scoop shot.

This caused the pressure to ramp up against the remaining Portsmouth batsmen, and they were failing to keep the scoreboard moving against some tight bowling from Ryman and Harvey.

The pair were holding their nerve exceptionally, bowling tight spells at the death, and the run rate continued to climb.

With 15 runs required off the final over, Ash-Lee Harvey secured the victory, picking up three wickets in a chaotic period of the game, and Rowledge had secured one of the most unlikely of victories on the south coast.