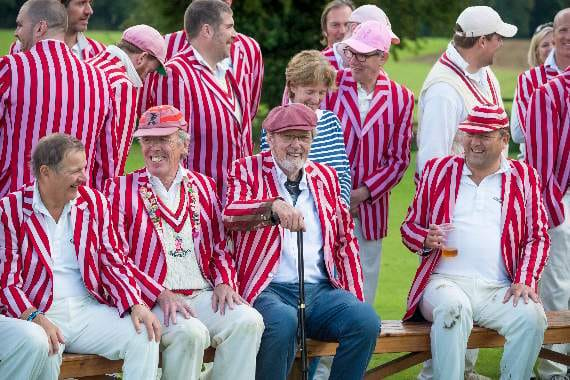 AFTER 37 long years of bowling, batting and the odd ale, Barrie Walshe, the founder of the Vagabonds Cricket Club, finally received a much deserved testimonial.

Having built a team around an ethos of fun and friendship over genuine cricketing skill, it was an attestation to the success of the club that the breadth and calibre of the players on show at Saturday’s game was reasonably high.

With two teams red and pink, named after the infamous colours of the team blazers, and a mixture of former, current and (hopefully) some younger future players, a fierce encounter was in store at their home ground in Bentworth, although the eventual result of the rain-interrupted match was largely inconsequential.

Much like the drinks on offer, the rain was frequent and free-flowing. However, this did little to dampen the spirits of those present at the match or the barbecue afterwards in the grounds of Bentworth Hall.

Since being formed in the pub in 1980, Vagabonds has followed the motto of ‘In Spiritu Societatio’ (in the spirit of good friendship) to the letter. Almost 200 people have turned out for the team either at their home ground or the many fine villages they visit every year. Players frequently travel from the Alton area, London and even further afield to turn out for a club where cricket is enjoyed and played it in a relaxed atmosphere.

The Vagabonds are currently 37 not out and will always welcome new members. For information and to get in touch with the club, visit the website: www.vagabondscricket .com