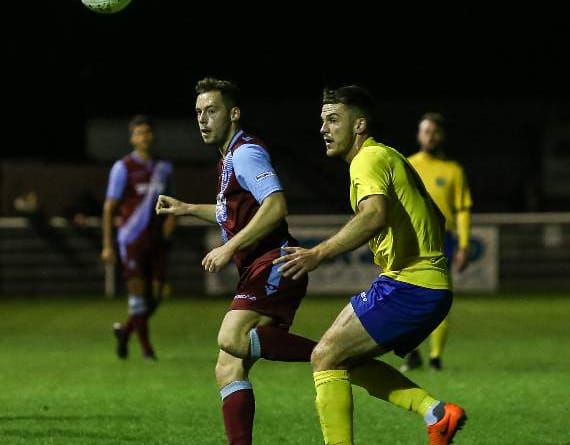 BANGED up Badshot Lea’s Wembley dreams are over for another year after the Baggies lost 2-1 at Christchurch in the FA Vase on Tuesday night.

Looking to repeat the heriocs of their FA Cup win at the MA Hurn Stadium in August, short-handed Badshot Lea were undone by a rare goalkeeping error from Kallum Lunn and a late penalty conceded by Josh Pound.

In between times, Brandon Lewington got on the end of a fine ball from Nick Medcraft to gleefully smack a half-volley past Christchurch goalkeeper Lewis Gunstone-Grey as Lea, missing six players, four through injury, sensed another famous cup win and a home tie with Falmouth Town in round three.

Lunn’s error, when he allowed Luke Stone’s speculative effort from the edge of the box to slip from his grasp on the slick surface in the 33rd minute, was particularly cruel as the Lea shotstopper had kept his side in the game at times with a string of fine saves.

He made a terrific save low to his right to push away a goalbound effort from Ben Satterley before a low parried effort denied Max Wilcock.

“Kallum’s been brilliant for us,” said Lea boss Gavin Smith, “and he made two or three great saves for us again last night. He’s made three mistakes this season in 20 games, he saves us more often than not.”

Such was the precarious nature of Lea’s preparations for a trip to Dorset on a chilly Tuesday night, after the initial tie planned for last Saturday was washed out by heavy rain, that Smith and co-manager Dave Ford were forced to blood under-18 player Jason Cotton up front alongside Louis Russell and fellow youngsters Zak Elliott, another exciting product of the Badshot Lea under-18s set up, Tom Macallan and Aidan Holland on the bench.

Medcraft, just back from injury himself, was forced into an emergency full back role with Darren Blake playing alongside the ever-impressive George Hedley at the back.

But against all odds, Lea fought, and gave Christchurch, currently lying second in the Premier Division of the Wessex League, an almighty scare.

“We’re disappointed to go out but pleased with the fact that despite having so many changes we put up a good fight,” said Smith, who will be another man down for the trip to Abbey Rangers in the league on Saturday after Russell was shown a straight red three minutes from time for abusive language.

“We played poorly when we played there before in the FA Cup, we were terrible, and I don’t know how we won that game, but last night was different, I thought we had a real go,” said Smith.

Despite being without the talismanic Nic Ciardini, Stacey Thripp, Mac Ford and Zac Hawker for a little bit longer, there is light at the end of the tunnel for Smith and Ford. “Everyone who is out is a couple of weeks away, it’s not like we have got people out long term but it just coincides with the toughest run of games that we could possibly have.”

After a trip to highflying Abbey Rangers in the Premier Division on Saturday (kick-off 3pm), the Baggies head up to Egham Town next Tuesday night (kick-off 7.45pm).