Lea boss makes a case for the defence 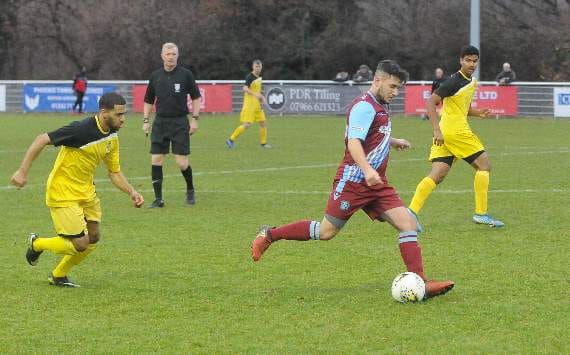 TROUBLED Badshot Lea boss Gavin Smith has highlighted a need for defensive steel in a bid to halt the team’s current slide.

Lea’s latest capitulation, against Redhill at Westfield Lane on Saturday at the hands of four-goal Mo Diakite, took the Baggies’ losing streak to five in the league and made it nine defeats in 11 games.

The desperate run has not only seen Lea slide to 14th in the Premier Division having flirted with the top four earlier in the season, it has also seen a once-healthy goal difference turn into a negative.

Petersfield Town frustrated by the weather as Fawley match postponed

Alton and Farnham Town gear up for eagerly-anticipated A31 derby

And Smith and co-manager Dave Ford, who have seen an exodus of players from the club since the heady days of this season’s fine FA Cup run as well as being hit by a string of injuries to key players, know they have to stem the bleeding.

“With the situation that we are in now we can’t keep on getting beaten the way that we are getting beaten, so I think first and foremost we are going to have to be defensively stronger and not worry so much about trying to win a game. We’ve got to stop losing games,” he said.

With so much hype and positivity surrounding the club’s move, at long last, to their own permanent home in Wrecclesham, Lea rode the crest of a wave in the early stages of the season as Smith and Ford, with trusted coaches Paul Harkness and Dan Bailey, built on the good work that they started durng the second half of last season after they took over the reins with Lea in desperate straits in the bottom two of the Premier Division and facing the very real prospect of relegation.

The wins and the goals were flowing early, including 5-0 wins over Frimley Green and Camberley Town, but Lea’s second qualifying round FA Cup defeat at the hands of Southern League side Hayes & Yeading has seen a distinct change and left the managerial duo scratching their heads and being forced to all but start again with a largely new squad, including a lot of young players and loanees whose availability is often uncertain.

“We know what we are trying to do and what we want, we could just do with a settled squad,” said former Bracknell Town player Smith.

“We had three new defenders in, which we’ve had to do. Every time we get stronger in one area we get weaker in another area. It’s a real juggling act at the moment just to get a team out of players playing in their right position.”

Trailing 1-0 against Redhill at half-time, Lea were handed a lifeline when striker Tom Cursons scored at the second attempt after the Baggies were gifted what Smith described as a “soft” penalty, but they conceded a second within minutes and then two in two minutes after Darren Blake was denied the chance to make it 2-2 when his firm header struk the post.

“We weren’t playing well, we looked like a team thrown together, no idea of what to do, what the plan was. We got through it but obviously it’s loads of new players, it’s tough. We are working as hard as we can to get people in but it’s not getting any easier. It’s going to be a tough period before it gets better.

“The problem is that we worked on a way that we were going to play pre-season and now we’ve got new players in and it’s almost like we are starting again.”