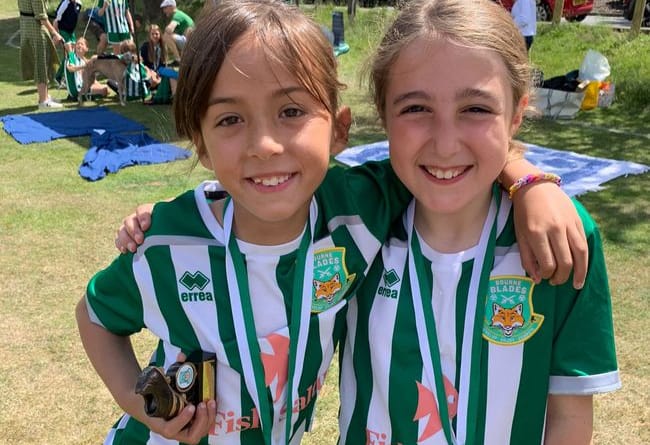 Bourne Blades community football club in Lower Bourne is looking to expand its female section on the back of the England women’s team’s European Championship victory.

Chairman Jason Hadden said: “Bourne Blades has proudly supported girls’ football at a grassroots level for the past three years and during this time we’ve seen the number of new joiners increase year on year across the various age groups.

“We understand that playing football has more than just health benefits, it can boost teamwork skills and build confidence. That’s why as a club we’re passionate about giving girls the opportunity to play from a young age.

“We’ve also established a women’s squad which not only provides lots of women an entry or re-entry into the game, it also ultimately provides a potential pathway for some of our girls. It’s early days for the women’s team but the uptake over the past three months has been fantastic.

“The future is bright and we hope both our women’s and girls’ teams will continue to go from strength to strength.”

Girls have always been part of the club, playing in mixed teams, but three years ago it introduced girls’ teams, which now range from under-seven to under-13. The aim is to have at least two teams at each age group plus organic growth in the older age groups.

The girls all play in the Surrey County Women’s and Girls’ Football League, with matches on Sunday mornings and training during the week, and can also play in the mixed teams, whose matches are on Saturdays in the North East Hampshire Youth League. They also play in summer tournaments.

A spokesperson said: “There is a great sense of team camaraderie in all of our girls’ teams and all have a strong willingness to learn and improve.”

Bourne Blades Women, formed by a mother who played at school in Sweden and another mother who started in a mums’ league of local primary schools, began training with UEFA coaches in April and have entered two teams in the Surrey FA Flexi League, a recreational women’s league which began in 2018 and has expanded rapidly, highlighting the demand for women’s football.

The spokesperson added: “It’s great exercise, great being part of a team again for so many of us, great for our mental health and age isn’t a barrier. After one session, most are hooked!”