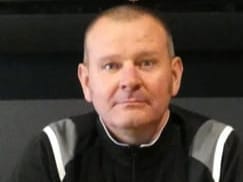 New Farnham Town manager Sean Birchnall is starting to piece together his playing squad for next season.

And he has one message for any new recruits: don’t even think about joining the club if you are afraid of hard work.

After spending 31 years in the Army – and enjoying success as head of the service’s football team – he will expect his players to toil.

“I want my team to work hard – my background tells you that, with my life in the military. I could talk about philosophies and whatnot, but if you don’t have the ball you can’t do anything. A centre forward can’t score a goal without the ball,” he said.

“My ethos has always been to work hard first and the players we are actively trying to recruit are ones we believe will buy into working hard.

“That’s our first principle. Everything else we can discuss later – the formation and that stuff will come when we look at the strengths of our players.”

Birchnall expects Farnham to have a much-changed line-up next season – and he already knows he will have to do without top scorer Josh Ogunseye, who found the net 18 times in the Combined Counties Premier South last season.

“Josh had unfortunately made the decision to leave before I was appointed, and some of the others have already made that call and decided to move on,” said Birchnall.

“We are now actively targeting the right players to add to the ones who have said they are staying.

“The club are still in a good position, we just need a few more additions to make us more competitive than we were.

“It’s normal turnover at the end of a season. It’s something you anticipate as a manager and it’s something we have to work our way through.

“It’s not just Farnham, other clubs are losing players as well and it’s important for us to identify who we want and to bring the right players in.

“We have to prepare Farnham as a Step 4 club. We have to have that mentality.

“If we get the right squad in and work hard, their ability will shine and we will be extremely competitive.

“I’m not going to say we are going to win the league – that’s not what I’m about. But we will be competitive if we get the right squad together and we can spend time coaching them and preparing them – we will definitely be doing things the right way.

“We are speaking to a lot of players. We are targeting players but so are Badshot Lea, so are Frimley Green, so are Camberley – and we are probably all targeting the same players.”