Bastable: Tear in my eye when I heard the news 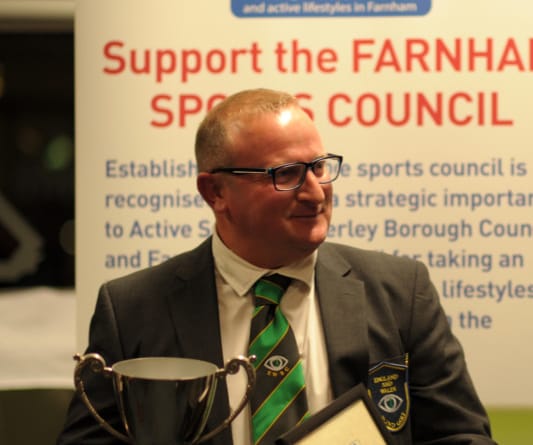 JASON BASTABLE has spoken of his pride of being named captain of England’s blind golfers.

As revealed in last week’s Herald, Jason is bringing the England team to Blackmoor this summer to play the annual Auld Enemies Cup, an international Ryder Cup-style match against Scotland.

He spent two years as vice-captain of the national team, and this year stepped up to the principal role.

And he says he thought his fellow players were pulling his leg about the appointment.

He said: “The players take a vote to nominate the captain and when they emailed me to tell me, I thought it was a wind-up.

“I thought it was lads having a bit of fun, and I said to them ‘leave off, guys’ and there was a bit of banter flying about.

“But then Barry Ritchie, the chairman, phoned me and congratulated me. To be honest, I had a little tear in my eye when he told me and I had to pinch myself.”

Jason – who celebrated his 50th birthday on December 21 – was in good form on the course last year.

He won a matchplay event and had other top-three and top-fine finishes, finishing third in the Order of Merit.

And that was despite starting the year with a new caddie, Darren Blake of Woking, who also acts as a guide and his eyes out on the course.

“We had a good year last year – normally it takes a couple of years for a player and his caddie to work well together, but we got on straight away,” said Jason.

“The new season gets under way in March and we have one or two tournaments a month right through to August. I’m looking forward to it.”

The season will end for Jason with the Auld Enemies Cup at Blackmoor.

He said: “The Auld Enemies Cup is played every year but after this year it might go to every other year because of finances.

“The way the world is at the moment there’s not so much help for charities. Players have to find the money themselves to travel to the tournament and it can get a bit expensive.

“This year is definitely happening but going forward it might change.

“It’s a great tournament as for us it’s like an end-of-season finale. Through the year we all play as individuals and at the end of the year it’s nice to get together and play as a team. We’re all friends and it’s great to have that team spirit for the last event.

“The top ten blind players in England take on Scotland’s top ten – we play about ten tournaments a year and it’s all down to where we finish on the Order of Merit.

“It’s quite exciting as we all work hard to make sure we finish in the top ten so we can play in this tournament.

“I’m captain this year so I’m guaranteed to play! I haven’t finished outside the top ten for the past five years, so I’d have been confident of gaining a place in the team anyhow. I’ve been doing okay.

“On the first day, which is a practice day for us, we will be inviting teams of fourballs to play. England and Wales Blind Golf is a charity and we need to try to raise funds.”

The practice day is on Monday, August 22 and more details about the charity event will be released nearer the time.