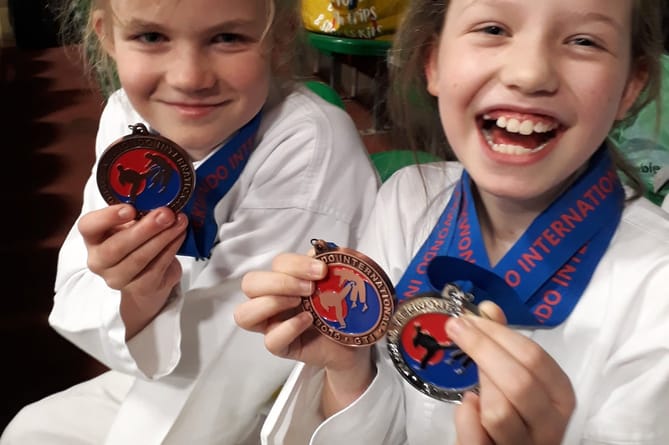 Medals and smiles from Tobias Carter and Keslyn Nawrattel as Farnham School of Tae Kwon Do made a successful return to action at the GTI English Open after two years of disruption because of the pandemic. Report and more photos on Page 40.

FARNHAM Golf Club is in the running to win a top national award.

The club has been named in a shortlist of four by England Golf as the best tournament venue in 2021.

Farnham hosted the English Under-18 Championship last summer, which for the first time saw boys and girls tee it up alongside one another and compete for one trophy.

It was deemed a huge success – and the course was set up so fairly that boys finished first and third, and girls were second and fourth.

The other three clubs on the shortlist are:

Malton and Norton (also in Yorkshire); and

Farnham general manager Ben Beagley said: “We are delighted to be on the shortlist.

“A lot of work went into that event and we had a really good committee who pulled everything together and led the organisation of it.

“We had 90-plus members who put themselves forward as volunteers for various duties to make sure it all ran like clockwork.

“So much work went into it by members and it was so well embraced by the membership that I was delighted to be able to share the good news with them and to be recognised for a job well done.”

The event proved popular with spectators as well as with England Golf.

Beagley said: “We had a lot of people here – because it was an under-18 event there were a lot of parents, friends and family and a lot of members came out to watch.

“There were also coaches and talent scouts and a lot of golfers from around the area who came down to see what was going on.

“There were some big crowds following certain groups and our own member Lottie Woad had a very good tournament, finishing second overall and the highest-placed girl.

“Being the first mixed event, it was interesting that the result saw the top four comprise two boys and two girls.”

The tournament earned the magnificent heathland course at Farnham Sands national recognition, and the play was streamed live on social media.

“The last time we held an event of that scale was back in the mid-1990s when we held an R&A senior championship that was co-hosted with Hankley Common, and this was our first-ever England Golf championship.

“With social media these days, and with England Golf being so active online, we picked up a lot of interest.

“We would like to host more events like that one. We have a number of other local tour events planned for this year and next.

“England Golf schedule their events quite a long way in advance, so we are hopeful we put on a good-enough show as hosts that they would come back in the future.

“We would love to host the under-18 championship again in the future, but we appreciate England Golf need to rotate it.

“We are very keen to hold other England Golf occasions and have been in touch with them about it.

“It’s a bit like being on The Open rota – once you are part of it, you hope you get your turn again in the future.”

There is certainly no shortage of players who want to join the Farnham club.

Beagley said: “In 20 years of being involved in golf clubs, I have never known anything like it.

“We have about 130 people on our waiting list – the demand to play is unlike anything I have ever known. We could do with building another golf course.

“As well as the full main playing membership, we have 100 academy players – new players who are learning.

“We have 20 gents, 20 ladies and 60 juniors learning the game, so we are doing our bit for growing the game at grassroots level.”

Farnham will discover whether they have won the award at a virtual ceremony hosted by broadcaster, journalist and avid golfer Naga Munchetty on Wednesday, April 20 from 6.30pm. It will be broadcast live on England Golf’s YouTube channel.