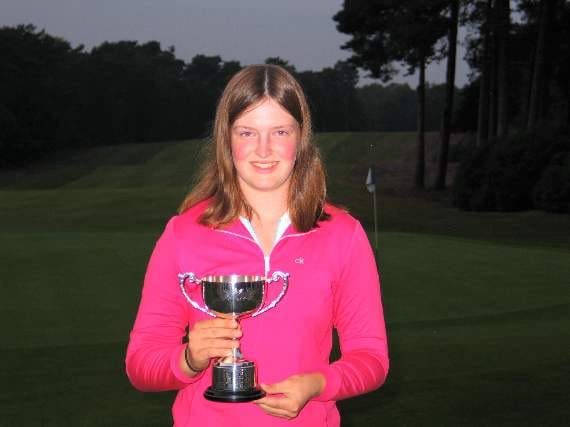 The victory was a case of third time lucky for the Farnham member.

On a perfect summer’s day, 50 golfers from all over the country competed in the 36-hole event.

Playing over the much-admired new layout at Liphook, and on the 6,013 yards par 71 measured yellow course for the first time, Lottie topped an excellent year which has included winning the Critchley Salver at Sunningdale, the Centenary Scratch Cup at Porters Park and the Bridget Jackson Bowl at Handsworth.

Lottie has also been runner-up at the Astor Salver at The Berkshire and the Frilford Scratch Salver at Frilford Heath this year.

She was also a member of the winning England team at the girls’ and boys’ Home Internationals.

Lottie was the leading points scorer, winning all six of her matches. She was the only player to do so.

Lottie was also runner-up in the inaugural England under-18 Championship – a new event featuring boys and girls playing for a single prize – this year.

She finished in fifth place in the English Women’s Open Strokeplay Championship this year, and was runner-up in the Peter McEvoy Trophy.

In August 2022 Lottie will take up a place at Florida State University.