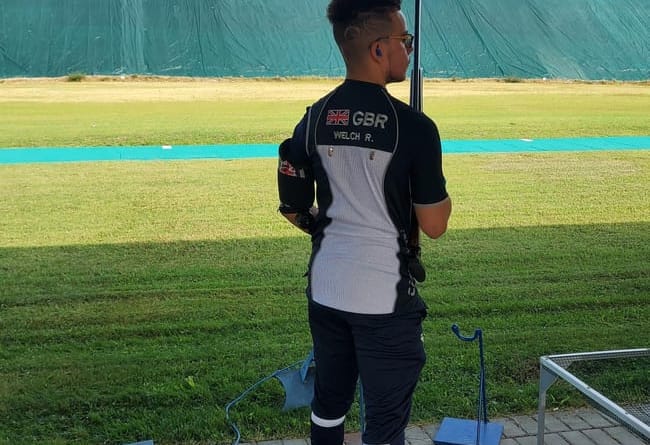 Medstead shotgun ace Reuben Welch has his sights set on appearing for Great Britain in the Paralympics.

The 20-year-old has taken the shooting world by storm since taking up the sport only three years ago.

The International Paralympic Committee is set to rule next year whether shooting will be included in the 2028 Games in Los Angeles.

The sport hopes it will be – and Reuben wants to be there.

His dad Julian was a coach at Alton Rugby Club and says Reuben was following his dream of becoming a professional player when tragedy struck.

He was diagnosed with a cyst on his brain but the pioneering surgery went wrong.

“Reuben spent a year in hospital and had to learn to walk again,” said Julian.

“He now wears prism-corrected glasses and has double vision all the time. The two things he sees interchange so he to work out each time which is the phantom image. He has limited use of his left leg and no functional use of his left arm.

Reuben is unusual in that he shoots 12-bore shotguns one-handed – and has become so competent that he now beats able-bodied shooters.

He shoots in the ParaTrap discipline – the same as Olympic Trap – whereby clays fly out of five stands at a random height and angle.

“His left arm is in a splint and he can’t move it, so had to adapt his shooting style.

“He works very hard at it. He goes to the gym to keep his body in shape and practises four times a week.

“He did a BTec in business studies at Alton College but he wants to shoot, and he does that on just about a full-time basis now.

“He has just got backing from his first international sponsor – RC Cartridges – and has been competing overseas for GB.

“He has received some coaching from Olympic medallist Steve Scott and has competed in Munich and Italy, France and America, has just won a bronze medal in international competition, two weeks ago he shot in the British Shotgun series and won a gold medal in ParaTrap and now has the opportunity to shoot in the World Cup in the UAE in November.

“His dream is the Paralympics but he also wants to do well against able-bodied shooters.”