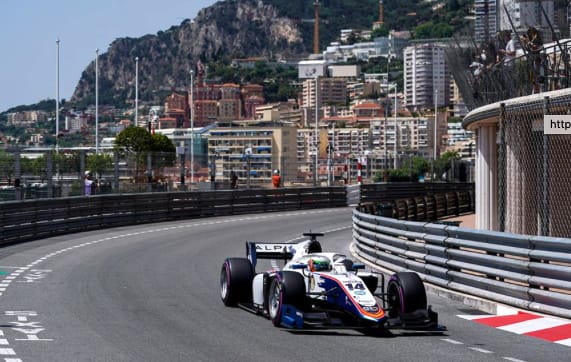 Olli Caldwell took to the streets of Monaco, making his motor racing debut at the principality – and finished unscathed.

Gaining places in both races and steering clear of the tight barriers, the Alpine Academy Formula 2 driver managed to finish his rookie weekend with a clean run of race finishes.

The infamous streets feature narrow straights and tight turns – allowing no room for error, it can trip up even the most experienced racers.

The 19-year-old was caught out in qualifying when he had no way to let a faster car by – yet was deemed to have impeded his rival and was one of a few drivers handed a grid drop penalty.

He was caught out at the start of the sprint race on Saturday afternoon by having to taking avoiding action from a stalled car on the grid, and initially lost some ground.

He also suffered a hair-raising lock-up as he exited the tunnel into the Nouvelle chicane and took the flag in 15th.

“It’s hard to overtake so we ended up in a train for most of the race. We also really struggled with the brakes, but luckily we managed to keep out of trouble,” said Olli.

Back in action early on Sunday morning, even though rain had threatened on the forecast, skies were bright as the grid formed for the Feature Race.

Having suffered wheel spin off the line, Olli found himself with nothing to lose and places to gain as the pack made their first circuit through the streets.

Making up two places where drivers ahead fell foul to incidents, he opted for the early pit stop strategy on lap ten. From there with 30 laps left to run, he mounted a challenge to stretch his tyres to the end.

Managing his pace and tyres perfectly, he crossed the line in 15th.

“With no overtaking possibilities we tried to run long into the race but we suffered a slow stop and our tyres died off pretty fast after that,” he said.