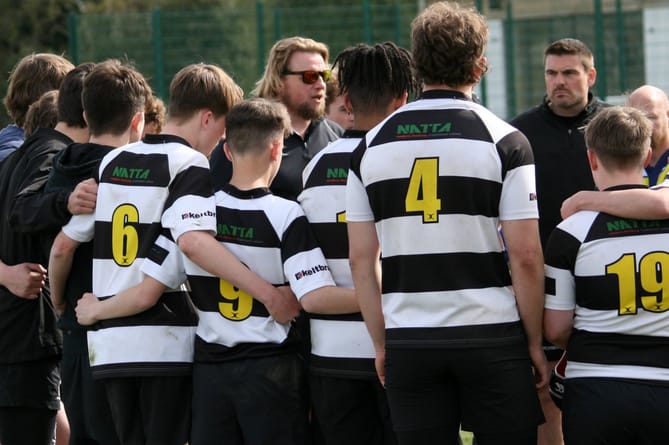 FARNHAM’S under-16s put in a convincing, match-winning display in their Hampshire Cup clash against a feisty Andover side.

This was the last competitive match for this age group that was large enough to compete in both Surrey and Hampshire county competitions.

Playing on the first pitch under the appreciative gaze of a good crowd of parents, the under-16s won 29-10.

The size and success of the age group is largely attributable to head coach Gavin Baker, a former first-team player and Harlequin.

Big Gav has nurtured this group of players since they were under-six, engendering a strong squad ethos and, without doubt, a love for the game.

His ten-year journey is now complete as he hands his charges over to the Academy for next season from which the boys will launch their senior career.

Club president Geoff Bond – himself the inaugural coach of the Academy – said: “Well done to Gav – it is a joy to be involved in the future of the club.

“No doubt he’ll enjoy having a lie-in on a Sunday morning – ten years is some commitment.

“This club is blessed by having qualified coaches who next year will start the process again with a group of under-fives, with more than 100 others guiding our young players throughout the age groups, boys and girls.

“And next year we are launching a rugby-oriented creche on Sunday mornings for the very, very young. As a club, we simply can’t stand still!”