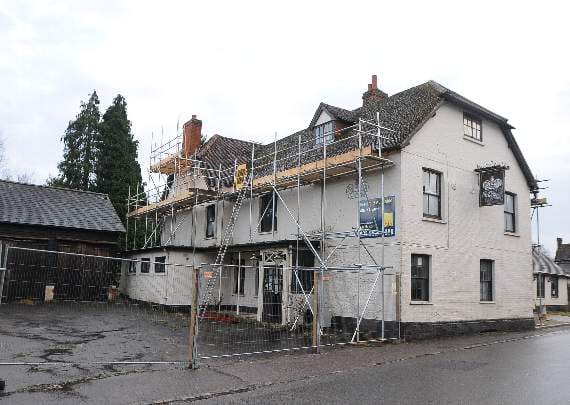 THE Queens Hotel in Selborne is an asset to the community and to the South Downs National Park (SDNP) tourism industry and should not be lost to housing.

That was the clear message from a planning inspector as she dismissed the appeal, brought by owners Warwick Developments Ltd, against a decision by the SDNP authority not to grant permission for the redevelopment of The Queens to provide five new homes in the village centre.

SDNP planners rejected the plans in February this year because they felt the facility had not been properly marketed and the owner could not demonstrate that the pub was no longer viable or required.

Following a public hearing on July 30, in reaching her decision, inspector Sophie Edwards upheld that decision – and this despite East Hampshire District Council having awarded and then revoked Asset of Community Value status on the site.

In her report, Ms Edwards drew attention to the fact that, in March 2016, the pub had been stripped of all fittings, fixtures and a number of internal walls, and that “significant expenditure would be required to reinstate the premises in full working order”.

She added: “Whatever the appellant’s motives were for carrying out those works, the value of the premises should reflect its present state.”

Despite the deteriorated state of the premises, Ms Edwards pointed out that two offers to purchase the freehold were received, which the appellant declined, as they were not reflective of market value.

But nor did the selling price reflect the current condition of the building, she said.

Different parts of the site had also been marketed separately, against planning policy.

Save the Queens campaigners hailed the decision as a “victory for Selborne”, and are now exploring ways to restore The Queens as a hotel to compliment The Selborne Arms.

Chair of the campaign group, Caroline Rye, said: “The inspector saw through the claims of non-viability put forward by the owners and her judgement acknowledges something that our supporters know to be true – that The Queens is a valuable community facility and tourism asset and its loss would be harmful to the community.”