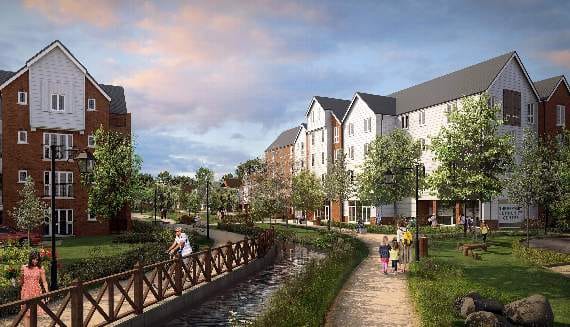 COUNCILLORS have universally praised developer CALA Homes for responding to the concerns of the community and amending its development plans for the former Molson Coors brewery site.

A revised application was submitted to East Hampshire District Council (EHDC) in August after a lengthy period of public engagement, and gained the backing of all 13 members of EHDC’s planning committee last Thursday.

Some concerns were retained – predominantly the scheme’s “obsolete” gas boilers and a potential new pedestrian cut-through into neighbouring Kings Mead.

But on the whole councillors were effusive in their praise of CALA’s approach.

Suzie Burns, Lib Dem member for Alton Ashdell, said CALA had made “lots of changes” following discussion with key groups in the town, and welcomed plans to return the River Wey to “a more natural state”.

Councillor Graham Hill, Tory member for Holybourne, added CALA has put “an enormous amount of time and effort” into the application, and was “very receptive to the good number of people who made suggestions”.

He added the proposed new community hub would be a “great asset to Alton” and was “very pleased that four dwellings have been dedicated for people from Treloar’s”.

Councillor Paula Langley, Labour member for Alton Eastbrooke, added the community hub was a “welcome addition” – even if it isn’t quite the large centre the community thought they were getting in 2017.

She also praised the hiring of a new ‘community liaison officer’ to support residents during the construction phase, but while supporting the scheme, stressed it is important “we don’t let CALA off the hook”.

“There are things I would like them to improve on – we have to keep them on their toes,” Cllr Langley said.