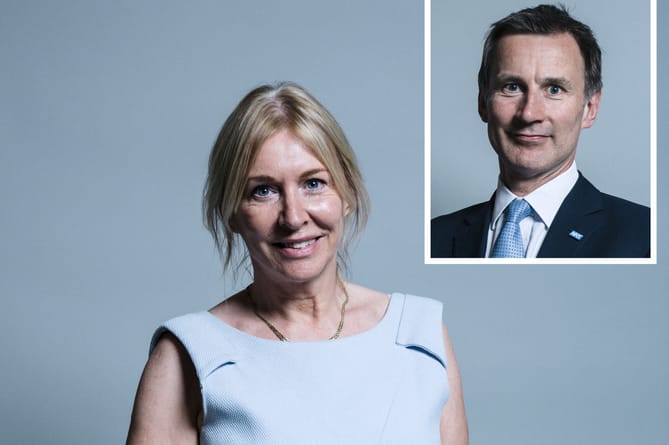 Cabinet minister Nadine Dorries has accused South West Surrey’s ‘duplicitous’ MP Jeremy Hunt of turning on the prime minister ahead of tonight’s confidence vote to serve his own “personal ambition”.

Boris Johnson is facing a vote of confidence later which could spell the end of his term as Conservative Party leader after at least 54 Conservative MPs sent letters to Sir Graham Brady, the chairman of the 1922 committee of backbench MPs, requesting the ballot.

Mr Johnson’s former leadership rival, Mr Hunt, has become the highest profile Tory to announce they will be voting against the prime minister.

Calling for fellow Tory MPs to “vote for change” in tonight’s ballot, Mr Hunt has warned his party risks losing the next general election should Boris remain at the helm.

But Secretary of State for Digital, Culture, Media and Sport, Nadine Dorries, has slammed Mr Hunt for campaigning against the prime minister.

In a series of tweets responding directly to Mr Hunt’s comments, Ms Dorries said: “On afternoon of 23rd July 2020 when I was health minister you telephoned me to tell me that we had to handle the pandemic following the example set by the East/China. That people testing + should be removed from their homes and placed into isolation hotels for two weeks.

“You said yr wife’s family had experience of this during SARS. I said that British people would never tolerate being removed from their homes and loved ones at which point you demanded I show you the evidence for that. Your handling of the pandemic would have been a disaster.

“Your pandemic preparation during six years as health secretary was found wanting and inadequate.Your duplicity right now in destabilising the party and country to serve your own personal ambition, more so.

“You told others that PM and Gov would swiftly collapse on back of Brexit and you would swoop in. You told me as much in Victoria St after GE. If you had been leader you’d have handed the keys of No10 to Corbyn. You’ve been wrong about almost everything, you are wrong again now.”

Mr Hunt’s remarks represent the first time the former health and foreign secretary has publicly campaigned against the prime minister since Mr Johnson edged him in the 2019 Tory leadership contest.

Mr Hunt said ahead of the confidence ballot: “The Conservative Party must now decide if it wishes to change its leader. Because of the situation in Ukraine this was not a debate I wanted to have now but under our rules we must do that.

“Having been trusted with power, Conservative MPs know in our hearts we are not giving the British people the leadership they deserve. We are not offering the integrity, competence and vision necessary to unleash the enormous potential of our country.

“And because we are no longer trusted by the electorate, who know this too, we are set to lose the next general election.

“Anyone who believes our country is stronger, fairer & more prosperous when led by Conservatives should reflect that the consequence of not changing will be to hand the country to others who do not share those values. Today’s decision is change or lose. I will be voting for change.”

Mr Johnson has been under increasing pressure over the so-called “partygate” scandal.

A report written by civil servant Sue Gray detailed a number of parties held at 10 Downing Street while the country was under strict Covid-19 lockdown measures.

Mr Brady said the Prime Minister was informed of the confidence vote on Sunday evening.

“The threshold of 15 per cent of the parliamentary party seeking a vote of confidence in the leader of the Conservative Party has been exceeded,” Mr Brady wrote.

The vote will be held between 6pm and 8pm this evening (Monday).

“The votes will be counted immediately afterwards. An announcement will be made at a time to be advised,” Mr Brady said.

A Downing Street spokesman said the vote was a “chance to end speculation and allow the government to draw a line and move on”.

At least 180 Conservative MPs would have to vote against Mr Johnson for him to have to stand down as Prime Minister.

Mr Hinds said: “It was essential to have investigation, lessons learned and apology. We now must move forward, united and with focus on the country’s priorities and the challenges we face, not a destabilising leadership election. I will be voting for the PM tonight.”