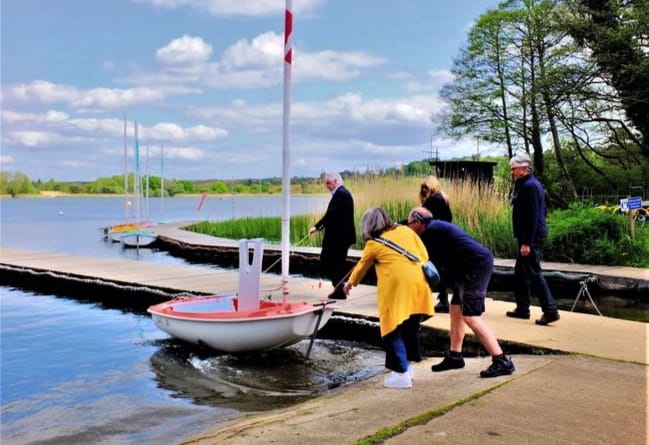 It was an emotional occasion when Sailability’s latest boat was launched.

The boat is Jolly Mo, a Hansa 2.3, and is named in honour of Maureen Aldridge, who was a popular figure at Frensham Pond for 17 years.

Within a year of her arrival Maureen had won the Lion’s Endeavour Trophy for the sailor who makes the most improvement in a year.

Throughout her time with Sailability, Maureen was a lively, entertaining member who took part in all the activities, as well as making the most of her sailing.

She was much loved by all the members of the club, and very much missed when she died.

Maureen hailed from Manchester and was known by her school friends as Mo, which is why the boat is named after her.

Her legacy enabled the club to buy this new boat for the fleet, and it will earn its place helping others to enjoy sailing.

Her family – Michael Gilligan, Bernadette Gilligan and Lisa Gilligan-Lee – went to the club to launch the boat.

Michael said sailing had been one of the highlights of her life and thanked the club for taking care of her, and providing such wonderful opportunities for others.

After a toast to Maureen, Jolly Mo was duly launched and, appropriately, one of the family, Lisa Gilligan-Lee, was the first to sail in her.

Michael and Bernadette also took to the water in a Laser Stratos.

Many members of the club were present at the ceremony, sharing memories of a very loveable lady.